Before we get to my number 1 episode…This has been so much fun I’m going to start a huge project. I want to review every Twilight Zone…all 156 episodes…so that will be next…my top 10 is not enough. I’ll start with S01E01 and work myself through and skip the 10 I’ve covered in this section. I’ve never rated shows or movies before but I will try that as well.

Now for my number 1 Twilight Zone episode! This one has my favorite element…Time Travel. How cool would it be to go back and meet your 11 year old self? Episodes 2-156 could change in my rankings but this one remains my favorite.

They really did this episode right. They followed through with everything. You were not wanting for answers at the end. It wasn’t just Martin who figured out he was back in time. It resolves it self nicely…with a valuable lesson. There are spoilers past this.

Martin Sloan, age thirty-six. Occupation: vice-president, ad agency, in charge of media. This is not just a Sunday drive for Martin Sloan. He perhaps doesn’t know it at the time, but it’s an exodus. Somewhere up the road he’s looking for sanity. And somewhere up the road, he’ll find something else.

Gig Young plays Martin Sloan who does a great job in this episode. Many people try to go back home but it’s never the same because of progress and change…Martin Sloan DOES go home and everything is the same…he even sees himself as a boy…and meets his parents…again. Also…watch out for a 4 year old Ron Howard…soon to be forever known as Opie on the Andy Griffith Show. 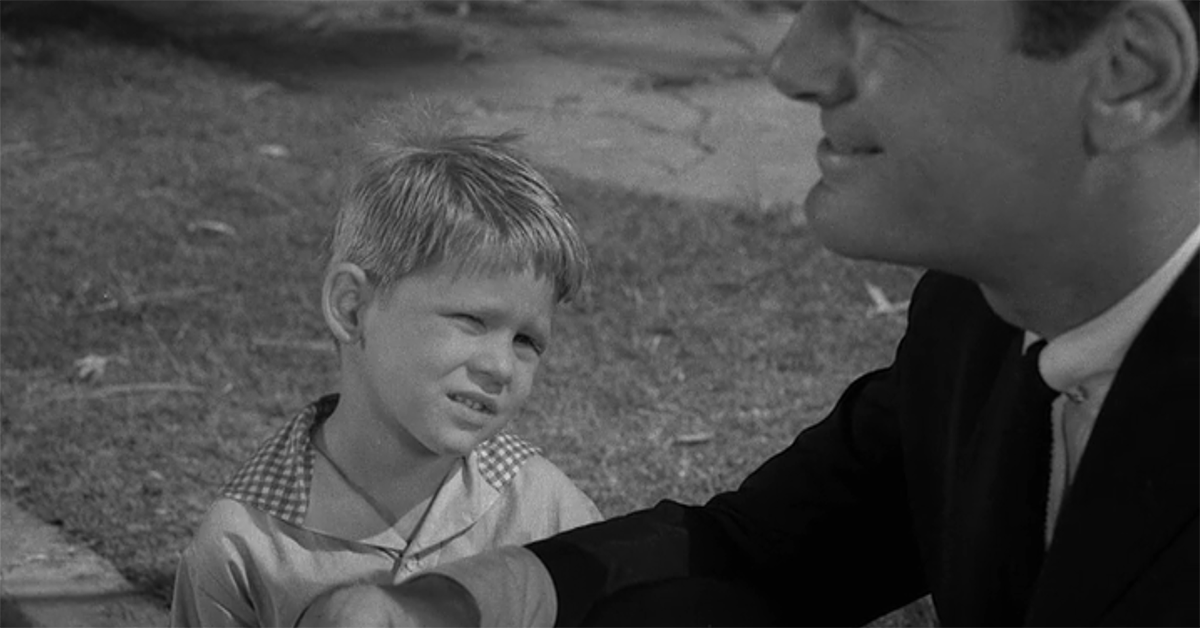 Martin Sloan (Gig Young), a 36-year-old executive, stops in a fuel station off an isolated country road. Not far away, 1.5 miles, is the sight of his hometown, Homewood, he’s very curious about all the kinds of things that shaped his childhood. Martin ventures to take a closer look, first he goes to an old shop where he used to get ice cream sodas. Martin is surprised to see the prices haven’t changed still a dime for a three scoop ice cream soda. Walking around Martin meets a kid, who is his old neighbor. It is then that he realizes he’s in 1934, when he was only 11-years-old. Things get complicated when he bumps into the young Martin, follows him to his house and meets with his parents. They won’t believe him when Martin says he’s in fact their grown up son. Later, Martin insists in talking with young Martin. He finds him on a carousel, where the child gets hurt falling. Martin will learn, after talking to his father, that every man has his own time and is perhaps better off not looking to the past.

Enough of my favorite episode…what is your favorite?

Martin Sloan, age thirty-six, vice-president in charge of media. Successful in most things but not in the one effort that all men try at some time in their lives—trying to go home again. And also like all men, perhaps there’ll be an occasion, maybe a summer night sometime, when he’ll look up from what he’s doing and listen to the distant music of a calliope, and hear the voices and the laughter of the people and the places of his past. And perhaps across his mind there’ll flit a little errant wish, that a man might not have to become old, never outgrow the parks and the merry-go-rounds of his youth. And he’ll smile then too, because he’ll know it is just an errant wish, some wisp of memory not too important really, some laughing ghosts that cross a man’s mind, that are a part of the Twilight Zone.