I can’t tell you how much I like this ballad by The Replacements. This song sounds so authentic that it hurts. I don’t normally try to interrupt songs. They mean different things to different people but this one hit home for me…I knew people like this and I spent my fair share of  time in bars playing to drinking customers.

The song is sad but an honest portrait. It’s a lonely life but a comfort to have people to be lonely with… but it also is a signal  that you could be spiraling slowly down. I have never been drinker but I did haunt some clubs (mostly playing music) in my earlier days nursing a drink into the night. I remember one night being at a club at 2am in the morning…thinking why the hell am I still here? That is when my days of being a regular stopped.

Tim is the fourth studio album by  The Replacements. It was released in October 1985 on Sire Records. It was their first major label release. Paul Westerberg wrote this song and played acoustic. 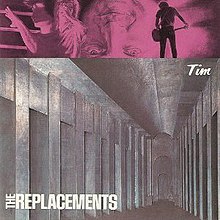 You’re like a picture on the fridge that’s never stocked with food
I used to live at home, now I stay at their house

Well a person can work up a mean mean thirst
after a hard day of nothin’ much at all
Summer’s passed, it’s too late to cut the grass
There ain’t much to rake anyway in the fall

And sometimes I just ain’t in the mood
to take my place in back with the loudmouths
You’re like a picture on the fridge that’s never stocked with food
I used to live at home, now I stay at the house

Kneeling alongside old Sad Eyes
He says opportunity knocks once then the door slams shut
All I know is I’m sick of everything that my money can buy
The fool who wastes his life, God rest his guts

First the lights, then the collar goes up, and the wind begins to blow
Turn your back on a pay-you-back, last call
First the glass, then the leaves that pass, then comes the snow
Ain’t much to rake anyway in the fall