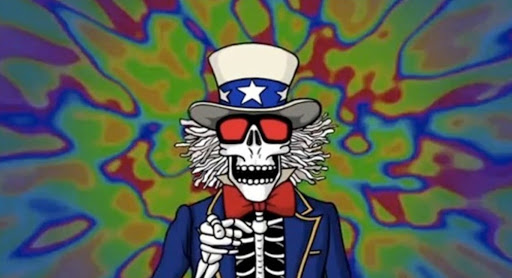 Shake the hand that shook the hand of P.T. Barnum and Charlie Chan

I love that line. This song has a cool simple guitar riff that starts it off into the Grateful Dead’s familiar shuffle beat. It’s a song that is commercial sounding and I don’t understand why it didn’t dent the charts. It’s a straight ahead rocker that has a great hook.

The song was released as a single with “Loose Lucy” as the B-side in 1974. It was on the album From The Mars Hotel. The album did peak at #16 in the Billboard Album Charts.

“U.S. Blues” grew out of a 1972 Grateful Dead song “One More Saturday Night.” Robert Hunter, the Dead’s lyricist wrote the words and Jerry Garcia wrote the music. They had a great writing partnership.

The song changed a lot through Hunter’s many rewrites. At some points it was a forceful anti-military  song, but the final result isn’t so serious. It’s a fun song that the Dead frequently played live.

P.T. Barnum and Charlie Chan are mentioned in the lyric.

P.T. Barnum – (1810-1891), showman, author. Born in Connecticut, Barnum began his career as showman in 1835 when he bought and exhibited slave who claimed to be 161 years old and the nurse of George Washington. Seven years later he opened his American Museum, in New York City, exhibiting the Fiji Mermaid (half monkey, half fish), General Tom Thumb (a midget less than three feet tall), and the original Siamese Twins, Chang and Eng. He also arranged the American tour of Jenny Lind, known as the Swedish Nightingale. After serving as mayor of Bridgeport and as a member of the Connecticut legislature, he organized “The Greatest Show on Earth,” a circus that opened in Brooklyn, New York, in 1871. A merger in 1881 created Barnum and Bailey’s.”

Charlie Chan – He is a fictional character…a pudgy, wise, smiling Chinese detective living in Hawaii who appears in a number of stores by Earl Derr Diggers. Chan has a large and constantly growing family–a son in the latter tales begins to learn the sleuthing business from his father–and Charlie is given to philosophical reflections, many of them supposedly culled from Chinese sages. … Chan first appeared in The House Without a Key (1925), later in other novels, in the movies, and in many radio sketches.”

Dead co-founder Bob Weir told Dupree’s Diamond News in their 18th issue (May 1991) that the song wasn’t meant to be favorable of Uncle Sam and American culture. “We have our pantheon, and one of the figures in the pantheon is Uncle Sam. He’s sort of like the godfather figure of American culture. So we actually have a fair bit of respect for him. And he comes around in different guises, you know – in our little region, he comes around as a skeleton, but he’s still wearing the same hat.”

“Uncle Sam,” who appears in the line, “I’m Uncle Sam, how do you do?” refers to a mythological character representing the United States government. The character first arose during the war of 1812. Uncle Sam appears in many contexts of varying seriousness, but one of the most consistent is as a military recruiter. During World War II it was common to see posters with Uncle Sam’s visage and the words “I Want You for U.S. Army.”

The lyric “blue suede shoes” in the first line refers to the song of the same name.

Red and white, blue suede shoes, I’m Uncle Sam, how do you do?
Gimme five, I’m still alive, ain’t no luck, I learned to duck.
Check my pulse, it don’t change. Stay seventy-two come shine or rain.
Wave the flag, pop the bag, rock the boat, skin the goat.
Wave that flag, wave it wide and high.

Summertime done, come and gone, my, oh, my.
I’m Uncle Sam, that’s who I am; Been hidin’ out in a rock and roll band.
Shake the hand that shook the hand of P.T. Barnum and Charlie Chan.
Shine your shoes, light your fuse. Can you use them ol’ U.S. Blues?
I’ll drink your health, share your wealth, run your life, steal your wife.
Wave that flag, wave it wide and high.

16 thoughts on “Grateful Dead – US Blues”