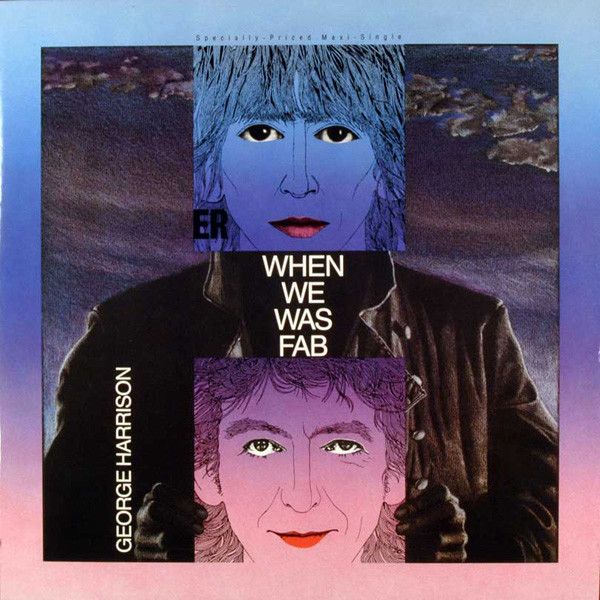 I loved this song when I heard it. To hear George sing about his time with The Beatles surprised me. Of all the Beatles George seemed to have the most resentment and some of it was understandable. A few years after this he would join the remaining Beatles and start on The Beatles Anthology.

George co-wrote the song with Jeff Lynne, who also co-produced the album that shortly pre-dates the two of them forming The Traveling Wilburys. ‘When We Was Fab’ is a musical nod to the psychedelic sound that the Beatles had made their own. George used a sitar, string quartet, and backward tape effects.

He also got some help from Ringo. Starr played drums on this track and a few others on the album. Harrison says that when he started writing the song, he had Ringo’s drumming in mind for the intro and the overall tempo.

Harrison wrote this after the Beatles had split up. It’s about the days of Beatlemania, when the group was known as “The Fab 4.” It sounds very much like a Beatles song.

Jeff Lynne, George’s bandmate from the superstar band The Traveling Wilburys and leader of The Electric Light Orchestra, produced this song and as well as the rest of this album. A huge Beatles fan, Jeff also appears briefly in the video for this song (look for the big afro).

Harrison states in this song: “income tax was all we had.” Excessive taxation was a scourge for him – he wrote the Beatles song “Taxman” on the subject.

Gary Wright, who had a big hit with “Dream Weaver,” played piano on this track.

When We Was Fab

The microscopes that magnified the tears
Studied warts and all
Still the life flowed on and on
(Fab! Doot, doot, doot, Gear!)
Long time ago when we was fab (Fab)

22 thoughts on “George Harrison – When We Was Fab”