Glory Days is a true story. In this song, Springsteen sings about a chance encounter with an old friend who was a star baseball player in high school. The old friend is Joe DePugh, and the encounter really did happen.

Springsteen and DePugh were classmates at St. Rose of Lima School in Freehold, New Jersey and played baseball together in the Babe Ruth League. They were good friends but drifted apart as Springsteen pursued music while DePugh took a shot at sports (he tried out for the Los Angeles Dodgers). In the summer of 1973, DePugh was walking into a bar called the Headliner in Neptune, New Jersey while Springsteen was walking out.

Bruce went back in, where he and his old friend talked about the good old days until the bar closed. When “Glory Days” was released, DePugh was living in Vermont, where word got out that he was the subject of the song. Springsteen confirmed the story at his 30th high school reunion in 1997, but DePugh wasn’t there; they finally met up again in 2005 when they met for lunch and once again relived their glory days. 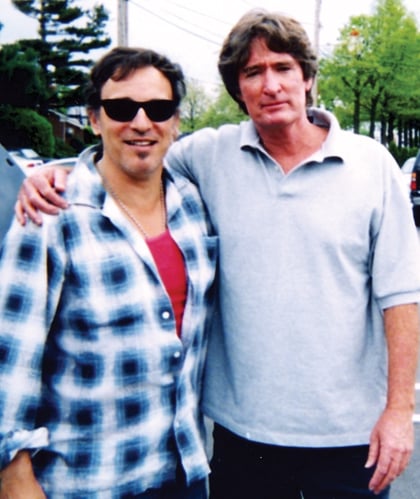 If you want to read about Joe DePugh here is a link:

This is one of Springsteen’s favorites. He almost always plays it at the impromptu bar gigs he is famous for on the Jersey Shore.

In concert, Springsteen often extends this to over 10 minutes. Perhaps the most compact version he ever played was at halftime of the 2009 Super Bowl, when he squeezed four songs into a 12-minute set.

Originally, this contained a fourth verse which mentioned Springsteen’s father working on the Ford assembly line.

Springsteen performed this June 25, 1993 on the last David Letterman Show on NBC. Letterman is a huge fan but had never had Springsteen on. Bruce did go on the show a few more times after it moved to CBS.

This was one of seven US Top 10 hits on Born In The U.S.A. The band first recorded it in 1982, but it was not released until the album came out.

The video was directed by John Sayles, who also did Springsteen’s promos for “Born In The U.S.A.” and “I’m On Fire.” In the video, Springsteen plays a cross between the character telling the story and the guy he’s singing about.

The full version of the video starts with Springsteen working construction (in real life he never had a job outside of music). In his reverie, he recalls his days playing baseball. Amid the scenes where the E Street Band is playing the song in a bar (Maxwell’s in Hoboken, New Jersey), we see him reminiscing with his glove and trophies from the glory days. At the end of the video Springsteen is on the field pitching to his son until his wife comes by in a station wagon to pick them up. It’s pretty clear that Springsteen was never much of a pitcher – his form is terrible. He was a right fielder when he played.

Julianne Phillips, who was Springsteen’s wife at the time, plays that role in the video, appearing in just one shot where she comes to get her boys. Patti Scialfa, who became the next Mrs. Springsteen in 1991, had joined the E Street Band in 1984 and gets a lot more face time in the clip.

On the day Springsteen released his album The Rising, he played a concert on The Today Show. This was the only song he played that was not on the new album.

I had a friend was a big baseball player
Back in high school
He could throw that speedball by you
Make you look like a fool boy
Saw him the other night at this roadside bar
I was walking in, he was walking out
We went back inside sat down had a few drinks
But all he kept talking about was

Well there’s a girl that lives up the block
Back in school she could turn all the boy’s heads
Sometimes on a Friday I’ll stop by
And have a few drinks after she put her kids to bed
Her and her husband Bobby well they split up
I guess it’s two years gone by now
We just sit around talking about the old times,
She says when she feels like crying
She starts laughing thinking about

Think I’m going down to the well tonight
And I’m going to drink till I get my fill
And I hope when I get old I don’t sit around thinking about it
But I probably will
Yeah, just sitting back trying to recapture
A little of the glory of, well time slips away
And leaves you with nothing mister but
Boring stories of