Bob Dylan released his first album in 1962. He was primarily known as a folk artist. Dylan would play with his acoustic guitar and harmonica.

On Saturday, July 24, 1965, Bob Dylan played the Newport Folk Festival and he played an acoustic set that all of his fans wanted. He received great applause… After that, he walked back on stage with a rock band and plugged in his 1964 Fender Stratocaster and all hell broke loose. His folk fans did NOT want him playing an electric guitar with a rock band. He did receive some cheers but they were mixed with a lot of boos. Dylan’s appearance is one of the most iconic performances of rock and roll.

Even after the boos, he was determined to continue down his electric path. It has been known as the time when “Dylan went electric.”

He toured in 1965 and 1966 with “The Hawks” as a backing band. The Hawks changed their name after the 66 tour and became The Band. During those tours, the boos continued throughout but Dylan pressed on. On the British leg of the tour the boos intensified and in one concert a fan of the old Dylan yelled out “Judas!”

Now back to the electric guitar that Bob played at Newport.

Dawn Peterson thought she owned the guitar, her father was a pilot who flew music acts in the 1960s. He said Dylan left this guitar on his plane. Dawn didn’t believe it until she saw a documentary picturing Bob Dylan on that Newport stage playing a guitar that looked just like her dad’s.

Bob Dylan thought he still had this Stratocaster…but in 2012 on the PBS series History Detectives… The experts matched the wood grain on the guitar owned by Dawn from the pictures of the historical event in 1965. The guitar was a match and it was no doubt that Dawn’s guitar was the one. Also in the guitar case were some of Dylan’s lyrics that he was working on in 65.

Lawyers got involved but it was soon settled that Dawn could sell the guitar.

Indianapolis Colts owner Jim Irsay purchased Dylan’s Newport guitar in 2013 for $965,000 in an auction,  making it the most expensive guitar to ever hit the auction block.

Within the case itself was another hidden gem: early-draft lyrics to three Dylan tunes (“Absolutely Sweet Marie,” “I Wanna Be Your Lover” and two others). Those pieces were estimated between $3,000 and $30,000 by the auction house.

The guitar was on display from November 2018 through November 2019 at the American Writers Museum in Chicago as part of Bob Dylan: Electric – an interactive exhibit curated by music journalist Alan Light chronicling Dylan’s impact on American writing and pop culture following the Newport performance. 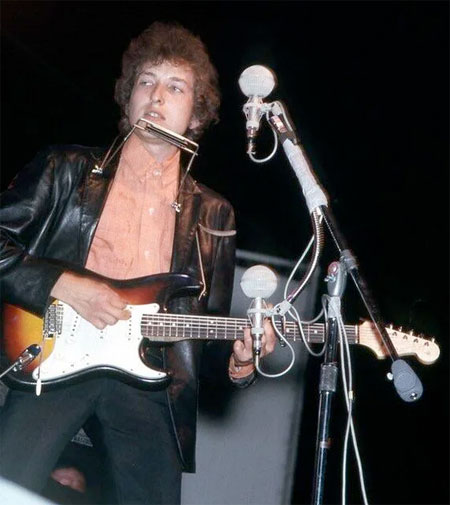 27 thoughts on “Where is…Bob Dylan’s Guitar He Played at The 1965 Newport Folk Festival?”