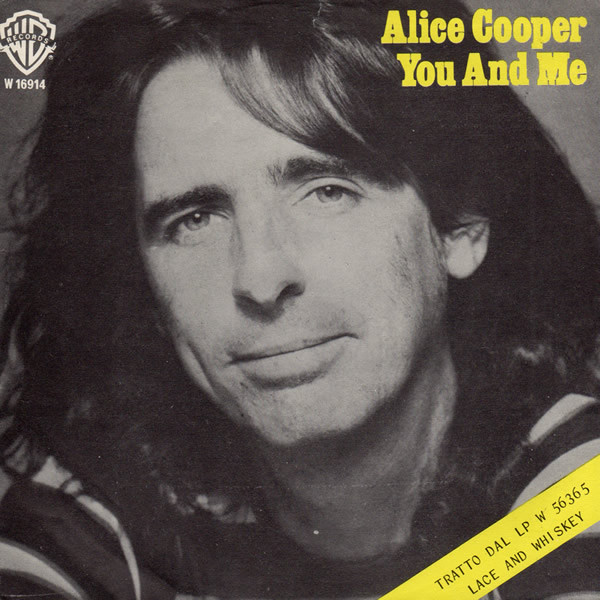 I remember the first time I heard this song. On Radio? On Record? Nope… Alice Cooper performed the song on The Muppet Show in his 1978 season three appearance, doing it as a duet with Beakie, a bird-ish Muppet who was actually the embodiment of Miss Piggy after she was transformed by Cooper.

This was the lead single off the 1977 album Lace and Whiskey, which was the shock-rock legend’s third album as a solo artist following the breakup of the original Alice Cooper band in 1974. Cooper decided to change up his sound a bit on this collection and soften his image.

This song was un-Cooper like although a couple of years before he did release a softer ballad Only Women Bleed.

Alice Cooper on his ballads: “I did those songs totally out of spite,” “I kept reading so many interviews and articles that I said I was never considered musical. Best rock show they ever saw, but musically lacking. ‘They aren’t as good as ELP.’ Of course not,” he laughed, “we didn’t want to be.”

A very romantic soft rock song by the Grandfather of Goth. It is every man’s love song to his significant other – celebrating the everyday pleasures of two people sharing their lives together.

This love ballad was a significant departure from Cooper’s usual dark-themed rockers. It was the last in a trilogy of ballads Cooper recorded, following “Only Women Bleed” and “I Never Cry” He has described this genre as “heavy metal housewife rock.”

This song was written by Cooper and the renowned rock guitarist and songwriter Dick Wagner. During his long and distinguished musical career, Wagner has played lead guitar and written songs for many big-name bands and artists. In addition to Cooper, some of the other notable musical acts he has worked with include KISS, Lou Reed, Peter Gabriel, Tori Amos, Frank Sinatra, Meat Loaf, Etta James, Ringo Starr, Guns N’ Roses, Rod Stewart, Air Supply and Tina Turner. Wagner contributed to several Alice Cooper albums, both as a guitarist and songwriter; he and Cooper usually collaborated on ballads. In addition to “You and Me,” other rock ballads Wagner co-wrote include “I Never Cry” and “Only Women Bleed.”

He considered it a concept album based on a 1940s-era detective he called “Inspector Maurice Escargot.” For his 1977 tour, Cooper divided his show into three sets: Oldies, Hell, and Lace And Whiskey. This third part he performed in his Escargot character.

Lace and Whiskey was produced by Bob Ezrin, who co-wrote most of the album’s tracks with Cooper and Dick Wagner. He also played keyboards on the album. Ezrin is a well-known figure in the music industry, particularly in the rock world. He was one of the most commercially successful producers in the 1970s and has done production work for a slew of top artists and bands, including KISS, Pink Floyd, Lou Reed, Rod Stewart, Jane’s Addiction, Hanoi Rocks, Deftones, Berlin, Nine Inch Nails and Peter Gabriel. Ezrin produced eleven albums for Cooper, including the hugely successful LPs Billion Dollar Babies and School’s Out.

This song climbed to #9 on the US Billboard Hot 100, marking his last Top-10 on the chart until “Poison” in 1989. The song also hit #23 on the Adult Contemporary chart, and # 3 on the singles chart in Australia.

When I get home from work,
I want to wrap myself around you.
I want to take you and squeeze you
Till the passion starts to rise.

I want to take you to heaven.
That would make my day complete.

Sometimes when you’re asleep
And I’m just starin’ at the ceiling,
I want to reach out and touch you,
But you just go on dreamin’.

If I could take you to heaven,
That would make my day complete.

You and me ain’t no super stars.
What we are is what we are.
We share a bed,
Some popcorn,
And TV, yeah.
And that’s enough for a workin’ man.
What I am is what I am.
And I tell you, babe,
You’re just enough for me.

When I get home from work,
I want to wrap myself around you.
I like to hold you squeeze you
Till the passion starts to rise.

I want to take you to heaven.
That would make my day complete.