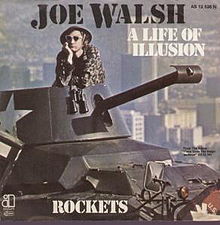 This song began as an instrumental track written by Kenny Passarelli when he was the bass player in Joe’s band Barnstorm, which was active from 1972-1974. Barnstorm never released it, but Walsh and Passarelli worked it up for Walsh’s first solo album, The Smoker You Drink, the Player You Get, in 1973, with Walsh adding the lyrics…but it didn’t make it on the album.

Passarelli shopped it around, pitching it to Elton John and Hall and Oates. When Walsh was working on this album, he and Passarelli worked with the song again and it was released.

Life’s been good to Joe Walsh, but what’s it all about? Sometimes it seems like life is just an illusion, and just when you start to comprehend it, it hits you right between the eyes.

Many musicians of his era looked to gurus or other zen masters to figure it all out, but Walsh seems to have sorted it out in this song, where he concludes that letting it all get to you is a waste of your day.

The Mariachi trumpets, played by the song’s co-writer Kenny Passarelli in what Walsh described as “a drunken stupor,” are nonsensical in a way that suits the song perfectly. Why are they there? Well, why are any of us here?

The phrase “a life of illusion” was used three years earlier in the title track to the film Grease, where Frankie Valli sings:

That song was written by Barry Gibb of the Bee Gees.

12 thoughts on “Joe Walsh – A Life Of Illusion”