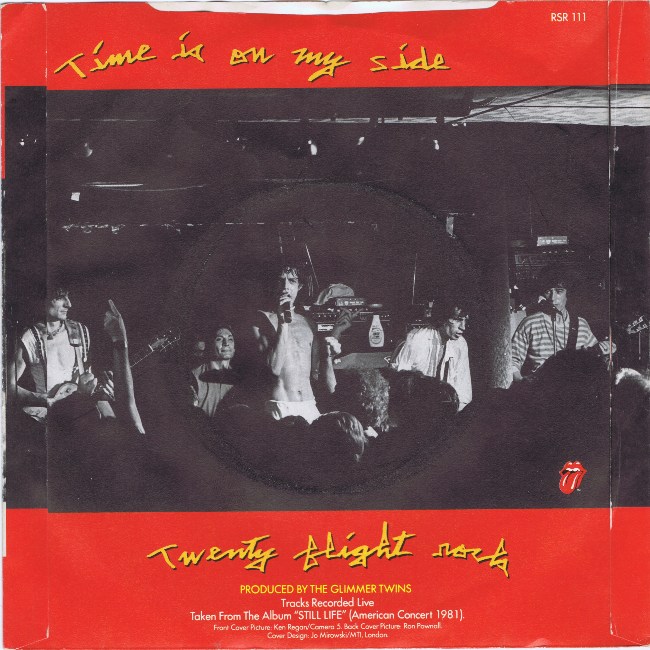 I remember back in 1981 when the Stones were touring across America. This song was released from the tour with a great version of Twenty Flight Rock. I bought the singles Going to a Go-Go and this one, the live album (Still Life) and then I saw the video Let’s Spend The Night Together. It was going to be the LAST tour of the Stones…uh yeah

The song was written by  Jerry Ragovoy (using the pseudonym “Norman Meade”). The song was originally released by the Stones in 1964 and it peaked at #6 in the Billboard 100. This is one of the very few songs that I prefer the live version to the studio version in 1964.

Keith Richards said of this song: “In America we were basically known for heavy, slowish kind of ballads. ‘Time Is On My Side,’ ‘Tell Me,’ ‘Heart of Stone,’ that was what we were known for. Strangely enough that was our thing. Every single was a slow song. Who would believe it? You’d think they’d be clamoring for out-and-out rock and roll, but no, it was the soul ballads that happened for us in America.”

This song was originally recorded by the jazz trombonist Kai Winding and his Orchestra on the Verve Records label in October 1963. His version was mostly instrumental with just the lyric “time is on my side” sung by the background trio of Cissy Houston, Dionne Warwick and Dee Dee Warwick.

The first fully vocal version was recorded by the New Orleans soul singer Irma Thomas; her version was released as the B-side of “Anyone Who Knows What Love Is (Will Understand)” in June 1964. The Rolling Stones released their version of the song in the US on September 26, 1964, and it became their first Top 10 hit in America. Thomas’ version contains a spoken part in the middle that the Stones left out.

The lyrics were most likely written by Jimmy Norman, who was a member of The Coasters. The songwriting credit is unclear, and usually lists Jerry Ragovoy, who wrote “Piece Of My Heart” and “Try” for Janis Joplin, as the only writer, sometimes as “Norman Meade,” which he used as a pseudonym. Thomas’ original single lists the credit as “J. Norman – N. Meade.” Ragovoy, who also produced the song for Thomas, died in 2011 at age 80.

In this song, Mick Jagger has lost his girl, but he knows it’s just a matter of time until he returns. After all, he’s got “the real love, the kind that you need.”

This was one of two songs The Stones performed on their first Ed Sullivan Show appearance, October 25, 1964. The other was “Around And Around,” a Chuck Berry cover.

That February, The Beatles made their historic debut on Sullivan to crowd hysteria. The Stones hadn’t yet developed a fan base in America, but the teenage girls in the audience still went crazy. The appearance earned them lots of attention and helped send “Time Is On My Side” up the chart – it reached #6 on December 5.

The Stones returned to the show five more times, always earning a wildly enthusiastic greeting from the crowd. On their fifth appearance, they capitulated to Sullivan by changing “Let’s Spend The Night Together” to “Let’s Spend Some Time Together.”

The Rolling Stones released two versions of this song. The US single was recorded in England and is slower, with a gospel organ. The British version was recorded at Chess studios in Chicago.

This song played a key role in the suspense thriller Fallen with Denzel Washington and John Goodman.

Time Is On My Side

Go ahead baby, go ahead, go ahead and light up the town!
And baby, do anything your heart desires
Remember, I’ll always be around.
And I know, I know like I told you so many times before
You’re gonna come back,
Yeah you’re going to come back baby
Knockin’, knockin’ right on my door.

32 thoughts on “Rolling Stones – Time Is On My Side”