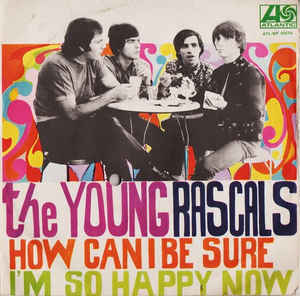 This song peaked at #4 in the Billboard 100 in 1967. How Can I Be Sure was written by Rascals Felix Cavaliere and Eddie Brigati. Another great single by The Young Rascals.

The Young Rascals formed in Garfield New Jersey in 1965. They were Eddie Brigati (vocals), Felix Cavaliere (keyboard, vocals), Gene Cornish (guitar), and Dino Danelli (drums). The group had plenty of  success, songs such as “A Beautiful Morning, “Good Lovin,’” “A Girl Like You,” and “People Got to be Free.” They had three number 1 hits, 6 Top Ten hits, and a total of 18 songs in the Billboard 100 before they disbanded in 1972.

This song was a follow-up to “Groovin’,” and was a huge hit. It’s a soulful ballad about the doubts of one’s first great love, particularly when the love is one-sided. The song was popular enough that it was covered by many artists, most notably David Cassidy in 1972, whose version reached #25 on the Billboard Top 100.

The Young Rascals’ original version didn’t hit in the UK and the first time it charted was in 1970 when a revival by Dusty Springfield scraped into the charts at #36. Two years later David Cassidy, who was at the time along with The Osmonds the most popular teen idol in the UK, went all the way to the top of the British singles chart with his cover.

How Can I Be Sure?

How do I know?
Maybe you’re trying to use me
Flying too high can confuse me
Touch me but don’t take me down

Whenever I
Whenever I am away from you
My alibi, is tellin’ people I don’t care for you
Maybe I’m just hanging around
With my head up, upside down
It’s a pity
I can’t seem to find someone
Who’s as pretty ‘n’ lovely as you

How’s the weather?
Weather or not, we’re together
Together, we’ll see it much better
I love you, I love you forever
You know where I can be found