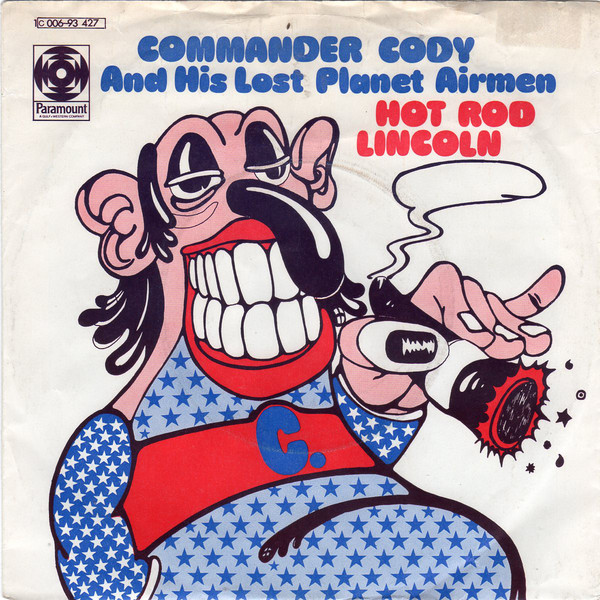 The main thing I like about the song is the guitar. It has a slight Chuck Berry feel to it and I like the fills the guitar player throws in. The band signed with Warner Brothers and the label wanted a soft country sound like the Eagles but the band refused to change it’s raw style.

Hot Rod Lincoln was originally written by Charlie Ryan. It was first recorded and released by Charlie Ryan and The Livingston Brothers in 1955. This was the only hit for Commander Cody and His Lost Planet Airmen, who were a County-Rock group formed at the University of Michigan. Commander Cody is the lead singer and piano player George Frayne.

Commander Cody and His Lost Planet Airmen are still out there touring now.

It tells the second half of the story started by the song “Hot Rod Race,” recorded in 1951 by Arkie Shibley and his Mountain Dew Boys, as referenced by the opening: “Have you heard this story of the Hot Rod Race, when Fords and Lincolns was settin’ the pace? That story is true, I’m here to say; I was drivin’ that Model A.” While the song tells of a race between a Lincoln and a Cadillac on the Grapevine grade in California, the actual location was on the Lewiston grade in Idaho.

The most iconic line from the song is: “Son, you’re gonna drive me to drinkin’ if you don’t stop drivin’ that Hot Rod Lincoln!”

Was there really a “hot-rod Lincoln?” Yes and no. Actually, it was a rebuilt car with the body of a Model “A” coupe set into the frame of a 1941 Lincoln, along with a “hopped-up” Lincoln engine block. However, at the time of this song’s writing, Ryan built a second car, this time with a chop-shop melding of a 1930 Model “A” Ford coupe and a wrecked 1948 Lincoln. It is this second restored car with which has Ryan toured.

Both the songs “Hot Rod Lincoln” and “Hot Rod Race” are defining anthems of the hot rod community and 1950s car song culture. “Hot Rod Lincoln” has appeared in the soundtracks to The Beverley Hillbillies and MTV’s Beavis and Butthead.

My pappy said, “Son, you’re gonna’ drive me to drinkin’
If you don’t stop drivin’ that Hot Rod Lincoln.”

Have you heard this story of the Hot Rod Race
When Fords and Lincolns was settin’ the pace.
That story is true, I’m here to say
I was drivin’ that Model A.

It’s got a Lincoln motor and it’s really souped up.
That Model A Vitimix makes it look like a pup.
It’s got eight cylinders; uses them all.
It’s got overdrive, just won’t stall.

With a 4-barrel carb and a dual exhaust,
With 4.11 gears you can really get lost.
It’s got safety tubes, but I ain’t scared.
The brakes are good, tires fair.

Pulled out of San Pedro late one night
The moon and the stars was shinin’ bright.
We was drivin’ up Grapevine Hill
Passing cars like they was standing still.

All of a sudden in a wink of an eye
A Cadillac sedan passed us by.
I said, “Boys, that’s a mark for me!”
By then the taillight was all you could see.

Now the fellas was ribbin’ me for bein’ behind,
So I thought I’d make the Lincoln unwind.
Took my foot off the gas and man alive,

I shoved it on down into overdrive.
Wound it up to a hundred-and-ten
My speedometer said that I hit top end.
My foot was blue, like lead to the floor.
That’s all there is and there ain’t no more.

Now the boys all thought I’d lost my sense
And telephone poles looked like a picket fence.
They said, “Slow down! I see spots!
The lines on the road just look like dots.”

Took a corner; sideswiped a truck,
Crossed my fingers just for luck.
My fenders was clickin’ the guardrail posts.
The guy beside me was white as a ghost.

Smoke was comin’ from out of the back
When I started to gain on that Cadillac.
Knew I could catch him, I thought I could pass.
Don’t you know by then we’d be low on gas?

We had flames comin’ from out of the side.
Feel the tension. Man! What a ride!
I said, “Look out, boys, I’ve got a license to fly!”
And that Caddy pulled over and let us by.

Now all of a sudden she started to knockin’,
And down in the dips she started to rockin’.
I looked in my mirror; a red light was blinkin’
The cops was after my Hot Rod Lincoln!

They arrested me and they put me in jail.
And called my pappy to throw my bail.
And he said, “Son, you’re gonna’ drive me to drinkin’
If you don’t stop drivin’ that hot rod Lincoln!”