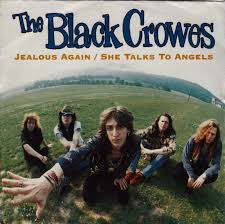 The song peaked at #30 at 1991 in the Billboard 100. The song was on their debut album Shake Your Money Maker that peaked at #4 in 1991. I really liked this band when they came out. They had a sound like the Stones and Faces of the early 70s.

I heard so many different origins of this song

Chris Robinson, wrote this song with his bandmate/brother Rich, said: “‘She Talks to Angels’ is a funny song in that so many people resonate with it. The dark details like drugs and things like that would be a part of growing up and being in this world, but when I wrote that song I had no idea – I hadn’t done any of those things. I hadn’t lived that – everything was in my imagination.”

During VH1’s The Black Crowes Storytellers, filmed at The Bottom Line in New York City on August 27, 1996, lead singer Chris Robinson explained that this song is not about “one” person, but rather a “hot dog” (as he put it) of people that they knew from the Atlanta club scene in their early days. “Not all the best parts” explained Chris, “or the best parts for you.” Chris says that there was always a girl in the club scene back then with really dark makeup (like Siouxsie And The Banshees), and after thinking about her one day, he scribbled the lyric “she paints her eyes as black as night.” He then went on to write an entire biography (completely made up, by the way) about her in the form of the song that then became “She Talks to Angels.” >>

The Christian band Third Day has a song about the Black Crowes that references this song and others. It’s called “Black Bird” and imitates their style. The song says that Third Day really likes The Black Crowes music but that they essentially need Jesus in their lives. There is a lyric in “Black Bird” that says “You say to talk to angels, well I say it’s such a lie.”

She Talks To Angels

She never mentions the word addiction
In certain company.
Yes, she’ll tell you she’s an orphan
After you meet her family.

She paints her eyes as black as night now.
Pulls those shades down tight.
Yeah, she gives me a smile when the pain comes.
The pain gonna make everything alright.

She keeps a lock of hair in her pocket.
She wears a cross around her neck.
Yes the hair is from a little boy,
And the cross from someone she has not met, well, not yet

She don’t know no lover,
None that I ever seen.
Yeah, to her that ain’t nothing
But to me it means, means everything.

She paints her eyes as black as night now.
Pulls those shades down tight.
Oh yeah there’s a smile when the pain comes.
Pain’s gonna make everything alright, alright yeah

7 thoughts on “Black Crowes – She Talks To Angels”