I’m on the second Peter Guralnick book about Elvis and I’m in the year of 1972…the jumpsuit, karate, Vegas Elvis. Though it had obvious hit potential, Elvis had just separated from his wife, Priscilla, and was not in the mood for a Rock n Roll number, so he wasn’t excited to record it. Elvis’ producer Felton Jarvis had to persuade him that the song was worth trying, and after 6 attempts, he recorded a suitable take. The song is great and Elvis’s performance is on the mark.

This song would peak at #2 in the Billboard 100 in 1972. Burning Love would his last top ten Billboard hit. The song was also released on an album titled Burning Love and Hits from his Movies: Volume 2… an album with this song and the rest very forgettable movie songs. This was another Colonel Tom Parker special. It was released on RCA’s budget label.

Album Covers… Elvis’s album packaging in the 1970s was just bland to me. Elvis…on stage…in the jumpsuit…in a karate pose and holding a mic. Since the sixties, album covers had been an important part of representing the artist. His covers were unmemorable and were put out cheaply to make a quick buck…very shortsighted and very Colonel Parker. The only one I remember well was the Aloha from Hawaii album with the satellite but it still didn’t compete with Pink Floyd, Led Zeppelin, and every other major act at the time. His album covers were interchangeable with each other for the most part. I’m not downing Elvis’s music but I just wish more thought would have been put into designing and marketing.

I’m not saying they had to be all works of art but a little more distinguishable.

When you see Abbey Road, Led Zeppelin II, Who’s Next, Dark Side of the Moon you know what songs are on them by just looking at them…Elvis albums? 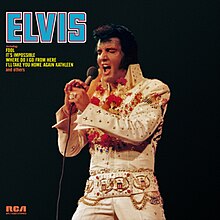 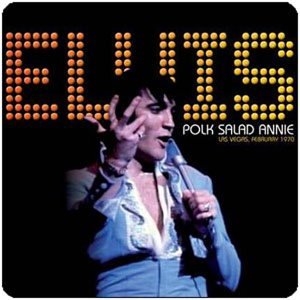 This was Elvis’ biggest hit single Stateside since “Suspicious Minds” in 1969 and his last Top 10 hit in the American Hot 100 or pop charts.

This song about the breakdown of a relationship had already featured on the self-titled 1972 album by Country-Soul pioneer Arthur Alexander.

In addition to making the original commercial recording of a song later covered by Elvis, Arthur Alexander has the claim of being the only songwriter in history to have his songs sung by The Beatles (“Anna (Go to Him))”), the Rolling Stones (“You’d Better Move On”) and Bob Dylan (“Sally Sue Brown”).

Dennis Linde, who wrote this song and also provided the guitar intro, was reclusive by nature and was at one time tagged “Nashville’s best-kept songwriting secret.” Apart from “Burning Love,” most of the successful songs he wrote were for Country stars, including,Roger Miller (“Tom Green County Fair” – 1970), Garth Brooks (“Callin’ Baton Rouge” – 1993) and The Dixie Chicks (“Goodbye Earl” – 1999.) In Britain, Welsh Rock and Roll revivalist Shakin’ Stevens recorded a #10 hit with his version of Linde’s “A Letter to You” in 1984.

In 2005, an Australian woman, who was evidently not a fan of this song, stabbed her partner in the back, thigh, and shoulder with a pair of scissors because “he played the song too many times.”

As part of a series of re-releases of Elvis songs in the UK in 2007 this re-entered the UK chart at #13.

Lord Almighty,
I feel my temperature rising
Higher higher
It’s burning through to my soul

Girl, girl, girl
You gonna set me on fire
My brain is flaming
I don’t know which way to go

Ooh, ooh, ooh,
I feel my temperature rising
Help me, I’m flaming
I must be a hundred and nine
Burning, burning, burning
And nothing can cool me
I just might turn into smoke
But I feel fine