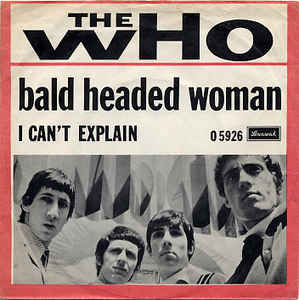 Great debut single by “The Who.” They released a single before this one but the band had a different name…”The High Numbers.” The song was released in 1964 but peaked at #8 in the UK in 1965.

I Can’t Explain is a simple 3 chord song and what makes it go are the drums. Keith makes his presence felt right away. This was not released on an album until 1971. It is the first song on one of the best compilation albums I ever bought, Meaty, Beaty, Big, and Bouncy.

Roger Daltrey said: “When we turned up to record it there was this other guitarist in the studio – Jimmy Page. And he’d brought in three backing vocalists, which was another shock. He must have discussed it with our management, but not with us, so we were thrown at first, thinking, ‘What the f–k’s going on here?’ But it was his way of recording.”

Page ended up playing the riff and Townsend played the solo.

John Carter, Perry Ford, and Ken Lewis provided the background vocals. The trio were popular session singers in England, where they were known for their harmony vocals. For session work, they called themselves The Ivy League, but they went on to have a hit called “Let’s Go To San Francisco” as The Flower Pot Men. Perry Ford also played piano on this track.

This was produced by an American named Shel Talmy. He was famous for putting loud, powerful guitar on the songs he produced, and had recently worked with The Kinks on their first hit, “You Really Got Me.” Talmy produced this in a similar style.

Jimmy Page of Led Zeppelin fame was a session musician at the time and was brought in to play guitar on this track. The Who producer Shel Talmy knew the guitar would be very prominent on this song and had Page ready in case Townshend couldn’t handle it. Pete did just fine, and quickly established himself as a premier rock guitarist.

The Who made their first US television appearance performing this on the ABC show Shindig. The program aired from 1964-1966 and featured many popular musicians performing their hits. The Everly Brothers, Glen Campbell, and Sonny and Cher were all frequent guests on the show.

Meaty, Beaty, Big And Bouncy was a 1971 compilation of The Who’s early hits, many of which did not appear on albums and could only be purchased as singles. In 1966, The Who broke their contract with manager and producer Shel Talmy. As part of the deal, Talmy got royalties from Who records over the next five years. By 1971, the band was able to release the compilation album without giving the royalties to Talmy.

The Who played this at the Woodstock festival in 1969. It was the second of 24 songs in their set, which ended with a performance of all the songs from their rock opera Tommy. The Who went on at 3 a.m. the second night of Woodstock and played until the sun came up the next day.

The Kinks song “You Really Got Me” was released the previous year and was also produced by Shel Talmy. If you hear similarities in the guitar riffs, you’re not along. Dave Davies of The Kinks says that when he heard “I Can’t Explain,” he thought those “cheeky buggers” from The Who were copying them.

This was a staple of the band’s setlists throughout their career. When The Who toured in 2015 for their 50th anniversary, it was the opening number. Promoting (sort of) the tour in a Rolling Stone interview, Pete Townshend said that he didn’t like performing, partly because songs like this one have no meaning for him anymore. “The first chord of ‘I Can’t Explain’ for me kind of sets the tone for the evening,” he said. “Is this going to be an evening in which I spend the whole evening pretending to be the Pete Townshend I used to be? Or do I pretend to be a grown-up? In both cases, I think I’m pretending.”

Roger Daltrey admitted to Mojo May 2018 that he thought “I Can’t Explain” was a bit namby-pamby. He explained: “It was the backing vocals. ‘Cos Shel Talmy got the Ivy League in. They did these kind of girly high (sings in comedy falsetto) ‘I caaan’t expaaaaain (laughs)’. But you know, it was commercial and it worked, and I was grateful for that.”

Dizzy in the head and I’m feeling blue
The things you’ve said, well, maybe they’re true
I’m gettin’ funny dreams again and again
I know what it means, but