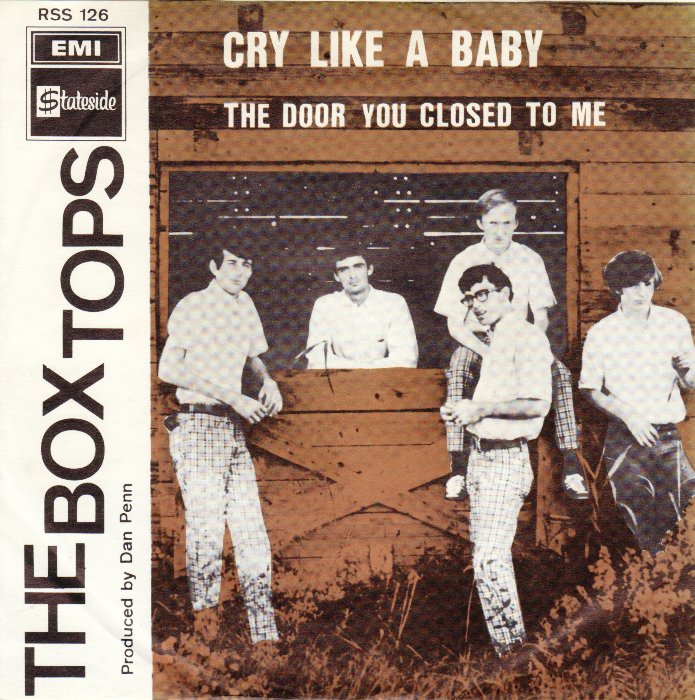 It’s hard to believe this voice was coming out of a teenager… An 18-year-old Alex Chilton was singing this song with the Box Tops. The song peaked at #2 in the Billboard 100, #15 in the UK, and #3 in Canada. The band was successful with 10 songs in the top 100, 2 top ten songs and a number 1 (The Letter). The Box Tops were formed in Memphis in 1967. The most famous member would be future Big Star member Alex Chilton.

A bizarre personal story…a one in a million shot…Back in the 90s, I was trying to call a musician that was recommended but I dialed a wrong number and talked to Gary Talley the guitar player for the Box Tops for a good 45 minutes. He laughed and told me that I at least reached a guitar player but in Nashville, my odds were good getting one with any number. He was really cool and we talked about guitars and his touring etc… He was giving guitar lessons at the time.  He told me that other people have called him looking for Garry Tallent the bass player for Bruce Springsteen.

Cry Like a Baby was recorded at American Studios in Memphis, which was run by Chips Moman, who produced the album. Spooner Oldham played keyboards on the track in addition to co-writing it.

This was written by Dewey “Spooner” Oldham and Dan Penn, whose other credits together include the hits “I’m Your Puppet” (a hit for James and Bobby Purify), “It Tears Me Up” (a hit for Percy Sledge) and “A Woman Left Lonely.” In our interview with Spooner Oldham, he told the story: “Dan Penn was producing The Box Tops, he had produced a #1 record called ‘The Letter.’ He recorded that in Memphis when he and I were both living there. So he calls me one day and says, ‘Spooner, will you help me try to write a song for Alex (Chilton) and the Box Tops?’ He says, ‘People have sent me some songs, but I don’t think any of them really fit. This record company’s been after me about three weeks for a follow-up single.’ And I said, ‘Sure, I’ll try to help write a song for you.’ We got together in the studio one evening with our little notes of our five or ten best ideas or titles. We each pulled one out and they eventually ended up in the garbage.

The next morning, we were getting tired and decided to call it quits. So we locked the doors, turned out the lights in the studio, turned off the instruments. Went across the street to the little café – name was Porky’s or something like that – and ordered breakfast. I remember I was putting my head on the table. There was nobody in there, I don’t think, but us and the cook. And I tiredly put my head on the table, my arms under my head, just for a few seconds. Then I lifted my head up and looked at Dan, and because I felt sorry that he needed another record and we were no help to each other that evening, I said, ‘Dan, I could just cry like a baby.’ And he says, ‘What did you say?’ And I said it again. He says, ‘I like that.’ So unbeknownst to me, we had a song started. By the time we walked across the street back to the studio, we had the first verse written. When we got in, he turned on the lights and the recorder, and I turned on the Hammond organ. He got his guitar out, and we put on a quarter-inch 90-minute tape, and we finished the song, just recorded a demo.

The next day or two in the morning Alex Chilton came in. I was so tired and weary I didn’t know what we had, if anything. I played the little tape demo to him and he smiled and reached out his hand, shook my hand, so I knew he liked it, anyway. And then we got in the studio and recorded it shortly, I think that day.”

In the tale of this song, a man previously took for granted the love of his caring, faithful girlfriend. He regrets how terribly he had treated her now that she’s left him. He now cries every time he sees her or even thinks of her.

This song is notable for its electric sitar, which was provided by guitarist Reggie Young.

It wasn’t worth crying over, but this song stayed at US #2 for two weeks, kept out of the top spot by Bobby Goldsboro’s “Honey,” which held the top spot for five weeks.

Today we passed on the street, and you just walked on by
how my heart just fell to my feet
and like a fool I began to cry