In the early 70s Television was going through a bout of criticism by the public because of its violence, there was the fear of government intervention and censorship. CBS decided to make the “Homecoming” into a series. Their reasoning was that once this family-oriented series aired and if it proved a failure, they would have shown they tried to put out a show that the public wanted. But the show did not fail. It took a little time, but it found its audience and CBS unexpectedly found itself with a smash hit on its hands.

The Waltons have been made fun of through the years. Other shows such as Good Times took shots at it for being too wholesome. I watched it when it was originally on. I liked the show and my mom thought I loved the show so she got me a Waltons Lunchbox. So while my buddies had the Superfriends, Evel Knievel, and cool lunchboxes I had the Waltons…yea my buddies got some mileage out of that but it was ok…I would love to have that lunchbox now.

A few years ago I got the complete DVD set and started to watch them again. The series had such quality scripts and the children were believable but the ones who made the show to me were Will Geer and Ellen Corby. 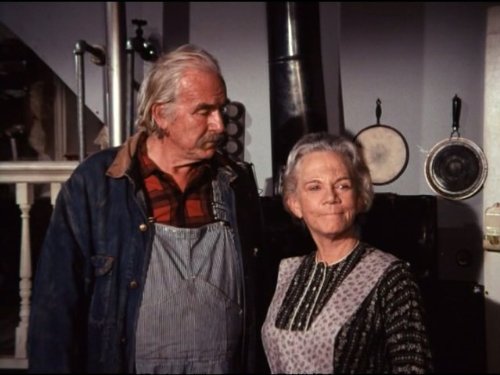 Will Geer’s grandpa was a grandpa everyone would love to have. Johnboy (Richard Thomas) was the lead to the show but when he left it remained solid to me. When Will Geer died the show missed him terribly. Ellen Corby’s grandma could be spicy and cantankerous and she helped balance the show from the sometimes sugary episodes.

The show ages well because it was set in the depression era and that is what you get until later on in the show’s run. The show remained a quality show in part because writer Earl Hamner Jr. remained with the show the nine years it was on. The show ended up winning 11 Emmy Awards…Good Night Johnboy became a catchphrase that you still hear today.

22 thoughts on “Remembering The Waltons”