I posted this in 2017 when not many people knew I was here.

Why did the professor bring that many books? Why did the Howells bring that much cash on a 3-hour cruise? How many dresses did Ginger pack? How many red/blue/white shirts did Gilligan, Skipper and the Professor own respectively? Why did they let Gilligan participate in getting rescued ploys? The Professor was a Macgyver times 20… He could make anything out of coconut shells, vines, and a spare part off of the SS Minnow…but he couldn’t build a raft or boat?

You tend to overlook that and just have fun. The network and critics hated the show. The public liked it and it has never stopped being broadcast because of syndication. Every day after school this was always on and I was always hoping as a kid for them to get off that island. I had no clue it was filmed years before I was watching it. They finally were rescued in some TV movies in the 70s long after the show had gone off the air. When I was a kid I went to a muscular dystrophy telethon and there she was…Dawn Wells standing there and I was 10 years old. She gave me an autographed picture and shook my hand…I didn’t wash that hand for at least a week…until mom made me. Sadly I lost the picture but I will never forget meeting her. She was down to earth and really kind.

My son’s 14th birthday party happened a few years ago and we had a projector set up for a giant screen…what did 14-year-old kids want to see in 2014? Gilligan’s Island. One thing I noticed about the color shows…they are very vivid….the color jumps out at you.

And THE question that gets asked… answer…Mary Ann!

The Mosquitoes…Bingo, Bango, Bongo, and Irving.. love the glasses that Irving is wearing…in real life…the Wellingtons. 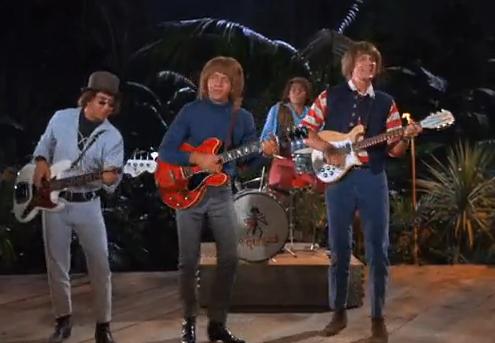