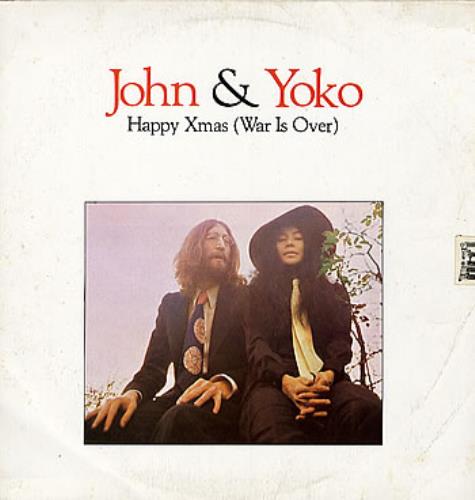 My favorite Christmas song hands down. Yea I’m biased because I am a Beatles fan but this one is great. John’s voice goes so well with this song. The song peaked at #2 in the UK charts in 1971.

John Lennon and Yoko Ono wrote this in their New York City hotel room and recorded it during the evening of October 28 and into the morning of the 29th, 1971 at the Record Plant in New York. It was released in the US for Christmas but didn’t chart. The next year, it was released in the UK, where it did much better, charting at #4. Eventually, the song became a Christmas classic in America, but it took a while.

John and Yoko spent a lot of time in the late ’60s and early ’70s working to promote peace. In 1969, they put up billboards in major cities around the world that said, “War is over! (If you want it).” Two years later this slogan became the basis for this song when Lennon decided to make a Christmas record with an anti-war message. John also claimed another inspiration for writing the song: he said he was “sick of ‘White Christmas.'”

Lennon and Ono produced this with the help of Phil Spector. Spector had worked on some of the later Beatles songs and also produced Lennon’s “Instant Karma.” It was not Spector’s first foray into Christmas music: he and his famous session stars (including a 17-year-old Cher) spent six weeks in the summer of 1963 putting together A Christmas Gift for You from Phil Spector, featuring artists like The Ronettes and Darlene Love. Unfortunately, the album was released on November 22, 1963, which was the same day US president John F. Kennedy was assassinated. The album sold poorly as America was focused on news of the killing.

This was originally released on clear green vinyl with Yoko Ono’s “Listen, The Snow Is Falling” as the B-side.

This being a Phil Spector production, four guitarists were brought in to play acoustic guitars: Hugh McCracken (who had recently played on the Paul McCartney album Ram), Chris Osbourne, Stu Scharf and Teddy Irwin. According to Richard Williams, who was reporting on the session for Uncut, when Lennon taught them the song, he asked them to “pretend it’s Christmas.” When one of the guitarists said he was Jewish, John told him, “Well, pretend it’s your birthday then.”

As for the other personnel, Jim Keltner played drums and sleigh bells, Nicky Hopkins played chimes and glockenspiel. Keltner and Hopkins were part of Lennon’s Plastic Ono Band, and a third member, Klaus Voorman, was supposed to play bass on this track, but got stuck on a flight from Germany. One of the guitarists brought in for the session covered the bass – which one nobody seems to remember.

The Fray were the first to chart with this song in America, reaching #50 in 2006; Sarah McLachlan’s version went to #107 that same year. Other artists to cover it include The Alarm, The Cranes, The December People, and Melissa Etheridge (in a medley with “Give Peace a Chance”).

The Australian artist Delta Goodrem also covered it in 2003, taking it to #1 in her native country as a double-A-side single with “Predictable.” >>

Though now a Christmas standard, Lennon originally penned this as a protest song about the Vietnam War, and the idea “that we’re just as responsible as the man who pushes the button. As long as people imagine that somebody’s doing it to them and that they have no control, then they have no control.”

This didn’t appear on an album until 1975, when it was included on Lennon’s Shaved Fish singles compilation. Most Christmas songs are compiled with other songs of the season, but Shaved Fish listeners got to hear it year round.