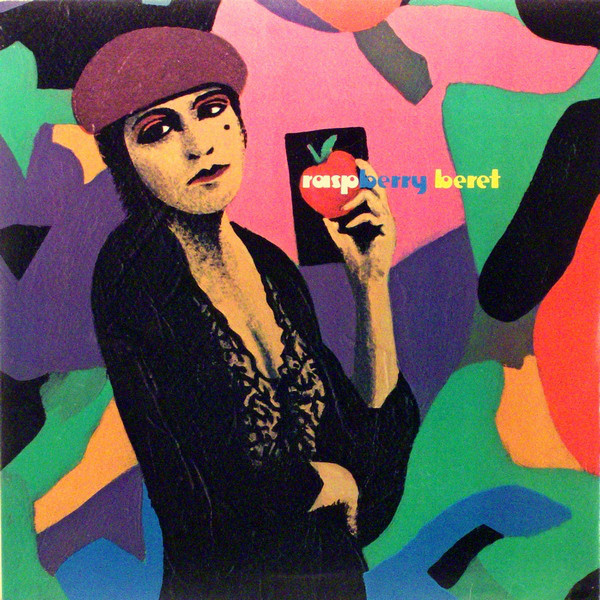 I liked Purple Rain but something about this song and the Around the World in a Day album…it showed more of a 60s psychedelic influence and I really liked it. The album wasn’t the success that Purple Rain was but still contained two top ten hits… Raspberry Beret and Pop Life.

Prince discussed the meaning of Around the World in a Day with Rolling Stone in 1985: “I was trying to say something about looking inside oneself to find perfection. Perfection is in everyone. Nobody’s perfect, but they can be. We may never reach that, but it’s better to strive than not.”

Prince originally recorded “Raspberry Beret” in 1982, but re-worked it with his newly re-formed Revolution backing band, which had just crystalized into what would become the fan favorite lineup: Brown Mark on bass, Bobby Z on drums, Wendy Melvoin, Lisa Coleman and Doctor Fink on keyboard, backing guitar, and backing vocals. If you blinked in the mid-’80s, you missed it, because this incarnation of the Revolution broke up by 1986, with Prince firing everybody but Doctor Fink.

This stands as one of the finest examples of the “Minneapolis sound,” blending in finger-cymbals, a string section, and a harmonica as a strategy to create a well-rounded groove. This style is sometimes called “The Prince Sound,” but there were a lot of other guys making it as well, many of them working with Prince at some point. For a great explanation of that sound and how it led to Paula Abdul’s music career, check out our interview with Oliver Leiber.

This song was used in the soundtrack to Girl 6, a 1996 film about a troubled actress turned phone sex worker. It was directed by Spike Lee and has Quentin Tarantino (!) in a supporting role.

At the time this was released, Prince was under fire from Tipper Gore during the notorious PMRC witch hunt, which placed two of his songs on the list of the “filthy 15” – “Darling Nikki” was the original song that got Tipper’s goat. So this is one of the songs where Prince started making his lyrics more family friendly. Nevertheless, you can’t miss “Old Man Johnson” as a reference to his you-know-what. Normally we’d stay clear of looking for euphemisms in lyrics, but come on, this is Prince we’re talking about.

The video is an odd mashup of performance footage and animation. Simon Fields, who was one of the top music video producers at the time, said in the book I Want My MTV: “We filmed a whole video, then Prince got a Japanese animator to do a completely different video and we mashed the two up. He would mess with directors. He would give them the impression that they’d be in charge of the video, then halfway through he’d go ‘Thank you,’ take what he liked, and edit it himself.”

“Raspberry Beret” was the first single from Prince’s Around the World in a Day album, his follow-up to Purple Rain. The album sold over three million copies in the US and spent three weeks at #1 in the summer of 1985.

I was working part time in a five-and-dime
My boss was Mr. McGee
He told me several times that he didn’t like my kind
‘Cause I was a bit too leisurely

Seems that I was busy doing something close to nothing
But different than the day before
That’s when I saw her, ooh, I saw her
She walked in through the out door, out door

Built like she was
She had the nerve to ask me
If I planned to do her any harm
So, look here
I put her on the back of my bike
And we went riding
Down by old man Johnson’s farm

I said now, overcast days never turned me on
But something about the clouds and her mixed
She wasn’t to bright
But I could tell when she kissed me
She knew how to get her kicks