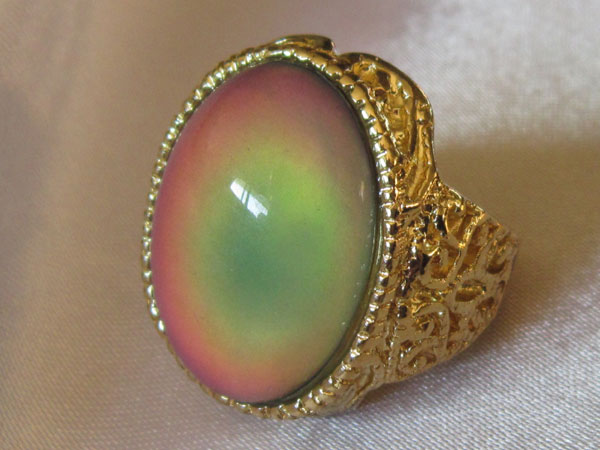 When someone says mood rings now…we think of the cheap dime store versions that are available. In 1975 they were not cheap. They were marketed as “portable biofeedback aids” and a silver one would cost $45 and a gold Mood Ring would be $250.

They supposedly could tell how the wearer was feeling…their mood. Marvin Wernick was the first to invent them but failed to patent it. Wernick got the idea when he saw a doctor use thermotropic tape on a child’s forehead. He then filled a glass shell with thermotropic liquid crystals and he attached it to a ring.

Since Wenick didn’t patent it Joshua Reynolds ended up with it and popularizing the ring. He marketed it as “portable biofeedback aids” and he made a million in a 3 month period in 1975. The company then went bankrupt because of the imitations out on the market. I had one of those imitations along with a free green finger that went with them.

They were a big fad for a while but started to die out. They never completely went away though… You can still buy them now.