As anyone who has read this blog knows, I like the 60s and 70s. I collect things from that era and even looked for a house in that era…I just didn’t know how many houses we would visit.

In 2004 my wife and I thought it was time to move from our starter home. We were learning to jump from the hall to living room to kitchen because we were getting crowded with our small home with a 4-year-old son, a mutt and a Saint Bernard running about.

We didn’t know what we wanted and were totally naive about house hunting. We only had so much money when we bought our starter home so it was easy…the second house we saw we bought. This time we had options and wanted to find our final house…THAT house…  We found an agent and she said: “I’ll show you 6 houses but you need to pick one of them and that will be it.” We didn’t like any of the houses she showed us that weekend.

We told the agent to forget it and started to freelance and ended up looking at 11 more by just going around and making appointments to visit houses. Ok, we are up to 17 now. But by this time we knew what we wanted. We wanted a 1970s style house…split level if possible.  An open floor plan with some land…and some room. My wife would not go for shag carpet (dang it) or an avocado refrigerator but she did like the older designs.

At the 18th house we looked at, we found an agent as crazy as we were named Naomi. She was new at being a real estate agent and said she would stick with us through the complete process. We kept going when we could and the number kept rising. I then got laid off my job in May of 2006…and it slowed us down but in July I was working again and the adventure continued.

Naomi could not understand why we would want an older house. She would try to dissuade us. She would try to slip in a new townhouse…we would arrive and say no…but she said she had to try. We looked in multiple counties to see if we could find what we wanted. We found nothing that was remotely close to my work.

We found many houses that we wanted. But it never failed that something would happen. The house would fail inspection, someone would beat us and sign first, at one house someone paid cash and got the house, or they would not take a contingent contract on our house selling…one time the owners changed their minds.

The total kept climbing but Naomi stayed with us…and we reached the 50s…We became really good friends with her and still are to this day. She still invites us over every year to her July 4th party. Namoi was learning with us and enjoyed looking at houses and actually started to appreciate the older houses.

Then it happened in 2007…We found a house (insert angels singing here)…the 55th house we looked at! We got there and drove down the driveway… I knew this was the one… the driveway was shadowed by the top of the trees hanging over it. It was an A-frame (with a 60s  vibe) with five bedrooms and surrounded by green everywhere…trees and woods…For some odd reason “Uncle John’s Band” kept playing in my mind. We got there and found out it was built in 1992. We were shocked… We thought it was older.

We talked to the man and wife who owned it. They were two public attorneys (Jim and Diane) and both were so nice. They talked with us a little and said the house was not on the market yet but Diane said we had good “Karma” …and if we wanted it…it was ours.

She bought the house when it was a 900 square foot A-frame on three acres. She then met her husband Jim and had a child…they built a wing and garage on one side…had more kids and built another wing on the other side. It is one of a kind with an open floor plan…and we bought it for under market value because they wanted to live near their work in Nashville and had already bought another house. They were offered more money by someone else but stuck with us…I was surprised but our “karma” must have won out. The inspection passed with flying colors…and nothing went wrong.

So we moved in…The Wife, the son, the Mutt and our Saint…and me of course…The irony of it all? We had searched all over for 3 years and even 60-100 miles away…and this house was 2 miles from where we were living. It’s hidden from the road and we had never laid our eyes on it.

After we bought the house Jim and Diane invited us to dinner at their new home. Turns out Jim knew Bob Jackson…if you don’t know Bob Jackson, he was in Badfinger right before Pete Ham passed away (see I tied pop culture into this). He had some interesting stories and they are great people.

The house has been a great investment…it’s climbed in value but we want to stay here till the end. I don’t have another search left in me…

By the way…We made it up to Naomi…we referred her to two of our friends who bought and sold their houses through her as the agent. She still calls us asking us if we want to go with her at times and visit houses. She said she misses going to see houses with us.

Since it wasn’t a seventies house I thought I would bring the seventies to it… the corner of my music room where I read. 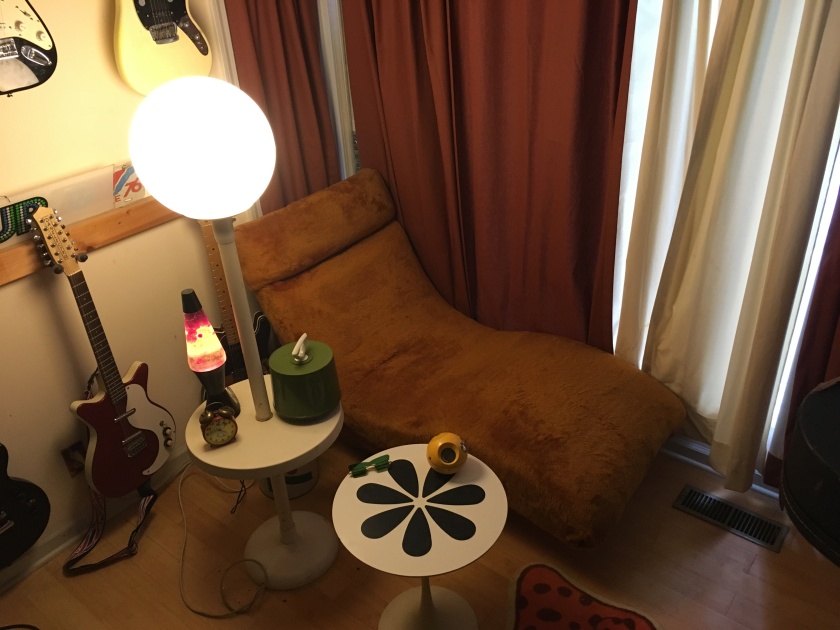