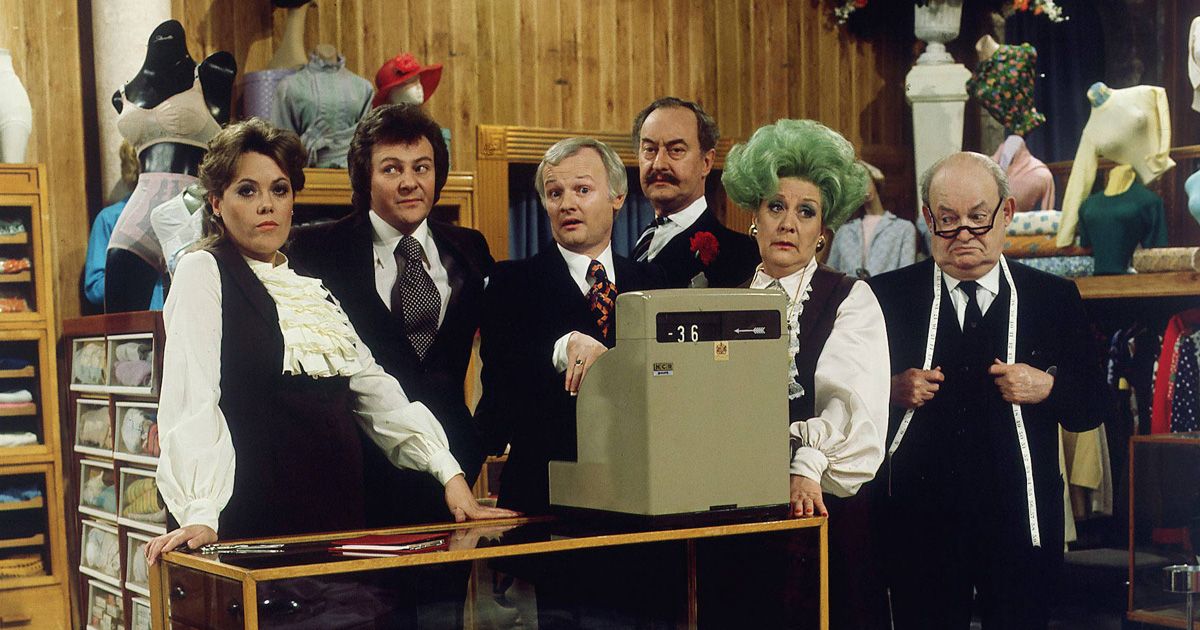 A fun British sitcom that aired from 1972-1985. This comedy is not subtle…it’s obvious and in the open.

The show is about a department store called Grace Bros. owned by the elderly Grace brothers. It is operated with the British class system. The show highlighted the Menswear and Womenswear departments and also the Floor Walker the pretentious Captain Peacock. It also featured the incompetent floor manager…Mr. Rumbold.

The Women’s department was run by Miss Slocombe. A lady that is known for her hair color changing every day and the love of her pussy cat…they get a lot of mileage out of that. She tries to elevate herself over the working class but that is just what she is…Her assistant is the young very pretty Miss Brahms who talks with a cockney accent and is proud of being thought of as working class.

The head of the Men’s department is Mr. Granger who is older and near retirement and seems to be in a sour mood most of the time. Two more men work in the department… The junior in the department is Mr. Lucas who is always late and flirting with Miss Brahms, never has money and always has to wait his turn before he can serve anyone and make money because the other two men have seniority, The other man is Mr. Humphries…probably the most popular character of the show. He hints at being gay every episode but never comes out and says it…this is really played up…remember it is the 70s. The writers go for the obvious jokes many times but it’s still funny.

The Grace brothers owned the store and “Young” Mr. Grace was in fact not young at all. He was stingy and he always had a very young attractive girl by his side.

The maintenance guy Mr. Mash and Mr. Harmon were great. They would make the devices to advertise the merchandise. Sometimes the machine they made would blow up or show some naughty things to the customers. They were union and they thumbed their nose at the everyone.

Mix these personalities and you got a funny show. The purpose of the sitcom basically was to expose the class system and to parody it.

The customers that shopped at Grace Bros department store usually left disappointed. The phrases I remember the most are “Are you free?” and while having a customer try on pants that obviously doesn’t fit…You would hear an employee say don’t worry ”They’ll ride up with wear.”

Some of the cast left and past away during the run of the show. They were replaced with different characters and the show went on. When the show ended in 1985 a spin-off was made called Grace and Favour.

The core cast was strong and the show was very good until the start of the 80’s and like most shows, they were reaching more for stories and repeating themselves. In 1979 when Trevor Bannister who played Mr. Lucas left it started to go down.

The sitcom had 69 episodes and a movie in 1977… well, you can say 70 episodes because in 2016 a new episode was made with different actors playing the same characters.

I wouldn’t compare this to Fawlty Towers because Fawlty Towers was better written… but this is a fun sitcom nonetheless. I remember it when I was young being broadcast on PBS. It is worth a watch if you like British humor.

5 thoughts on “Are You Being Served?”