“Crosstown Trafic” was recorded at the Record Plant in 1968. Traffic’s Dave Mason was a guest vocalist on this song. This song includes a famous kazoo riff, which Hendrix originally performed using a comb and a piece of cellophane.

This song peaked at #52 on the Billboard 100 in 1968. The album was Electric Ladyland and it was Jimi’s only number 1 album in Billboard.

Hendrix wanted a Linda Eastman photo for the album cover… A photo of the band and some kids at Central Park on an Alice In Wonderland Statue… he wrote  “Please use color picture with us and the kids on the statue for front or back cover — OUTSIDE COVER,”  but Reprise ignored his request…this is the photo he wanted. 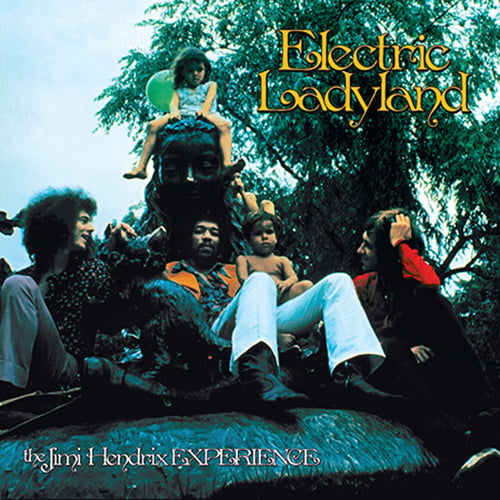 Instead, they used this one

The UK cover was of 19 nude women which again…Jimi didn’t want or ask for… The public opinion was that the cover was tasteless. Hendrix agreed. He distanced himself from the photo in interviews and proclaimed disdain for the photo.

This song is about a girl who is hard to get rid of. Getting through to her that she’s not wanted is like getting through crosstown traffic.

The lyrics are similar to many Blues songs in that they are filled with sexual references in clever metaphors: “I’m not the only soul, who’s accused of hit and run, tire tracks all across your back, I can see you’ve had your fun.”

Dave Mason from the group Traffic sang on this. That’s him singing the high part on the word “Traffic.”

Chas Chandler produced the original tracks, but Hendrix remixed them when he started producing his own music in 1968.

You jump in front of my car when you
you know all the time
Ninety miles an hour, girl, is the speed I drive
You tell me it’s alright, you don’t mind a little pain
You say you just want me to take you for a drive

I’m not the only soul who’s accused of hit and run
Tire tracks all across your back
I can, I can see you had your fun
But, darlin’ can’t you see my signals turn from green to red
And with you I can see a traffic jam straight up ahead