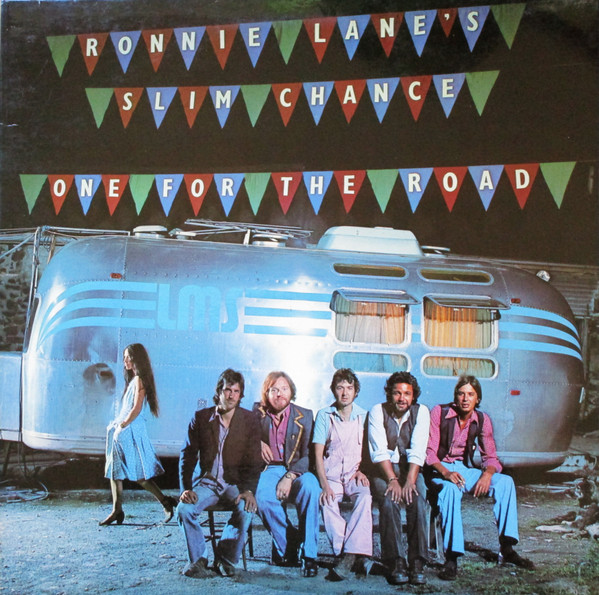 This song doesn’t have a catchy chorus or a commercial feel at all but I love it. The first time I heard it I was at a bar at closing time…drinking rum and coke. It’s pure music by Ronnie Lane who walked away from the successful Faces to do his own thing.

This was the title track off of his album One For The Road released in 1975. He did this album with his band Slim Chance. The album was overlooked at the time but now is praised. I had the album at one time…it’s a good album…very consistent.

Ronnie Lane was a Britsh songwriter and bass player. He started with the Small Faces as the bass player and he and Steve Marriott wrote most of bands songs. The Small Faces never toured America so they never really broke out big. They did have 11 top twenty hits in the UK but only one in America with Itchycoo Park charting at #16.

Steve Mariott left the Small Faces in 1968 and Rod Stewart and Ronnie Wood joined Ronnie Lane, Kenney Jones, and Ian McLagan to start The Faces. The Faces released four albums between 1970-1973… First Step, Long Player, A Nod is as Good as a Wink…to a Blind Horse and Ooh La La. They were one of the top grossing touring bands.

After Rod Stewart’s solo career took off his interest in the band began to wane and in 1973 Ronnie Lane quit. After Ronnie left the Faces, they made no more studio albums.

Ronnie started his own folk-country band named “Slim Chance” and released a surprise hit single “Come On” in 1973 and it went to #11 in the UK. Ronnie had a unique idea of touring. His tour was called “The Passing Show” which toured the countryside with a circus tent and included a ringmaster and clowns.

During the recording of “Rough Mix” Lane diagnosed with was Multiple Sclerosis. He still toured with Eric Clapton and others afterward and released an album in 1979 called “See Me.”

Ronnie Lane died of Pneumonia while in the final stages of Multiple Sclerosis in 1997.

One For The Road

[Chorus]
And it’s one for the road, yes it is
One for the cat’s eyes, yes and
One for the white line
That’s takin’ me back home

[Chorus]
And it’s one for the road, yes it is
One for the cat’s eyes, yes and
One for the white line
That’s takin’ me back home

[Verse 6]
Oh, now, I’ve seen my woman
Take her gardenia, now she stares away
Stares out the window and her eyes are grey
I’ve known my woman

16 thoughts on “Ronnie Lane – One For The Road”