This song was on the Infidels album. That is my favorite Dylan album of the 80s by far. I wore it out when I bought it. Great album. Songs like Jokerman, Neighborhood Bully, Union Sundown, and many more. 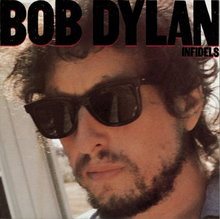 I liked the song straight off. It did remind me of the old line that has been used over and over again in bars and clubs ALL over the world.

Sometimes it’s hard to post Dylan’s music because of the varied meanings of his songs…so I don’t even try to decipher them. I will say this though…the melody and lyrics flow perfectly. Dylan isn’t known much for ballads but this is a great one.

The first time I heard this song was watching a video of it. That led me to get the album. It was Dylan’s first music video in the MTV era and it pulled me in to buy the album. The video for the song featured Carla Olson, Steve Ripley, drummer Charlie Quintana, and Clydie King. In the clip, Olson mimes former Rolling Stone Mick Taylor’s guitar part and solo.

Dylan recorded this song with an all-star cast. Dire Straits’ Mark Knopfler and the Stones’ Mick Taylor on guitar, Alan Clark on keyboards, Robbie Shakespeare on bass, and Sly Dunbar on drums.

Dylan’s previous album Shot of Love was released in 1981 and wrapped up a trilogy of Christian-based albums. Infidels was thought to be his return to secular music but he kept biblical imagery in this song.  Lines such as “They say in your father’s house, there’s many a mansions” which is a reference to John 14:2 –  In my Father’s house are many mansions: if it were not so, I would have told you. I go to prepare a place for you.

British engineer Ian Taylor talks about Bob: “He was very specific about how the solo should start, it wasn’t about the sound he wanted, but the first few notes. He wanted the guitar solo at the end, the last thing you hear. So he wanted it to embellish the spirit of the song.”

Joni Mitchell considers Sweetheart Like You one of her favorite Bob Dylan songs ” for its Damon Runyon style of storytelling” and she recorded it on her “Artist’s Choice: Joni Mitchell—music that matters to her” compilation released through Starbucks in 2005.

Well the pressure’s down, the boss ain’t here
He’s gone North, for a while
They say that vanity got the best of him
But he sure left here in style
By the way, that’s a cute hat
And that smile’s so hard to resist
But what’s a sweetheart like you doing in a dump like this?

You know, I once knew a woman who looked like you
She wanted a whole man, not just a half
She used to call me sweet daddy when I was only a child
You kind of remind me of her when you laugh
In order to deal in this game, got to make the queen disappear
It’s done with a flick of the wrist
What’s a sweetheart like you doing in a dump like this?

You know a woman like you should be at home
That’s where you belong
Taking care for somebody nice
Who don’t know how to do you wrong
Just how much abuse will you be able to take?
Well, there’s no way to tell by that first kiss
What’s a sweetheart like you doing in a dump like this?

You know you can make a name for yourself
You can hear them tires squeal
You could be known as the most beautiful woman
Who ever crawled across cut glass to make a deal.

You know, news of you has come down the line
Even before ya came in the door
They say in your father’s house, there’s many a mansions
Each one of them got a fireproof floor
Snap out of it baby, people are jealous of you
They smile to your face, but behind your back they hiss
What’s a sweetheart like you doing in a dump like this?

Got to be an important person to be in here, honey
Got to have done some evil deed
Got to have your own harem when you come in the door
Got to play your harp until your lips bleed.
They say that patriotism is the last refuge
To which a scoundrel clings
Steal a little and they throw you in jail
Steal a lot and they make you king
There’s only one step down from here, baby
It’s called the land of permanent bliss
What’s a sweetheart like you doing in a dump like this?