Welcome to the Hanspostcard TV Draft. I hope you will enjoy it! Today’s post was written by Lisa at https://tao-talk.com/

Although I had another series slated for this spot, I changed my mind again. I noticed I had no series chosen with a female lead, and that just isn’t cool in my book. Instead of whatever it was, now it is the UK’s BBC Series, “New Tricks,” which ran for 12 seasons (107 episodes,) from 2003 – 2015. Originally airing on BBC, it is now available, depending on season, on BBC Video, Acorn Media, or BBC First.

I remember browsing titles at the library’s online database and happening across it. I immediately loved the premise for the series, which describes a very talented and rising star in the law enforcement ranks being asked to lead a newly formed task force to work cold cases. The team is a group of older, already retired detectives that are being asked to come out of retirement to try to crack old cases that have remained unsolved for sometimes twenty years or more. The genres of New Tricks are comedy and crime.

Cute video about how team was formed:

The Cast:
Amanda Redman as Deputy Superintendant Sandra Pullman is the tough-edged, wise-cracking career law enforcement rising star. Sandra has never married and has no children. She has a nice home that she doesn’t seem to get very much time to relax in and enjoy as the tacit understanding with her team is that she is available to them 24/7; and they do take her up on it. Sandra’s mother lives in assisted living; but the two feel mutually uncomfortably incompatible with each other. Sandra preferred her late father, who was also a police officer, and there is a sense that Sandra’s mother resents her for choosing her dad over her. At the same time Sandra’s mom has never told Sandra the whole truth about her dad, whose story does get slowly revealed over time.

Dennis Waterman plays Gerry Standing, a man who has been divorced a few times and has at least a few babymama’s. He is always complaining that his ex-wives are draining him dry with child support. Gerry has got a roving eye for the ladies and is frequently trying to make time with a “tasty piece of skirt.” It doesn’t take much to imagine he might be multiply divorced because of that tendency. That said, he’s very friendly with all of his ex-wives and his daughters, and his ex-wives and daughters are all friendly with each other. Poor Gerry doesn’t stand a chance with all of that estrogen power. As the series rolls on there is a suggestion that Gerry might have had some crooked or at least semi-crooked history while he was a detective before. He also may have/had a problem with gambling, which can always lead a person down a crooked path. Gerry lives alone in a nice home. Once in awhile he does get lucky and finds a date. 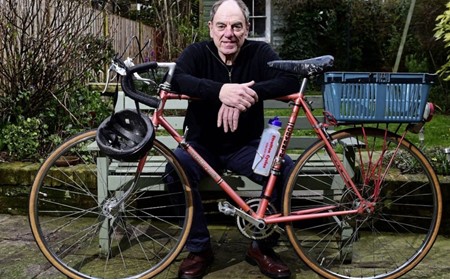 Alun Armstrong plays Brian Lane. Brian is married to Esther, who is played by Susan Jameson. Brian is what some might call an odd duck. His history is that of a raging alcoholic that has gone to rehab and remains sober; mental health issues manifest themselves in myriad Aspergersian perceptions, beliefs, and actions. Brian is highly intelligent and has a tendency to obsess over cases and lots of other things. He’s a master of internet and other records searches and has the analytic capacity to synthesize clues into often viable theories. He’s frequently trying new hobbies or practicing old ones. He rides his bike everywhere (not sure if he lost his driver’s license from drunk driving or not.)

Esther is an endearing character, but she doesn’t take much of Brian’s guff. At the same time, she is there for him, steadfast, calm, and catering to him in a way that keeps him emotionally regulated (with the help of his prescription medications.) Esther has made a lovely home atmosphere and keeps her own mind and body active with socializing with friends and with hobbies. She is also very welcoming of the other team members, as they, along with the work, also help to keep Brian stable.

James Bolam plays Jack Halford. Jack is a widower whose wife, Mary, was killed, where the details of her death are revealed over time. Jack has a shrine of his wife set up in his back yard. He has regular conversations with her spirit that remains very much alive to Jack. Jack is the most by-the-book of the team, both with regulations and with ethics. Don’t ask Jack to bend the rules; he’s likely to box your ears. Jack is another excellent clue analyzer. He probably has the worst temper of the bunch and gets stressed out a lot.

Anthony Calf plays D.A.C. Strickland. Strickland is the administrator who hired Sandra and lays out his expectations for the Cold Case Team (UCOS is its official acronym that sometimes gets made fun of.) If I remember correctly all four of them are resistant to all of the others at first for one reason or another. Strickland is a very sharp-minded strategist who knows what he’s doing and is often several moves ahead of everyone else. His presentation is deadpan, but his humor is sharp. Even though he seems intimidating, Sandra can usually wheedle what she needs out of him. When the team is successful, he, of course, makes sure everyone knows he is the one who made it happen.

The other main cast characters are other team members who replace the main four, but only after many seasons have passed. I watched the series through season 10, but stopped after more of the original people were gone than remained. I can’t say a lot about these other folks other than who they are and who they played. 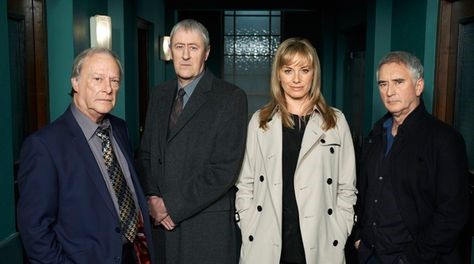 Most every episode there is a new villain or villains; very few carry over beyond one. The locations vary from urban to rural. One of my favorite episodes (a 2-part) is set at The Rock of Gibraltar.

Writing and Directing Credits
Writing credits on every episode go to Nigel McCrery and Roy Mitchell, with almost 40 others getting credits over the 12 seasons. There were 25 different directors, with Julian Simpson directing the most, at 17.

Synopsis: As already described above, the team has been pulled together to solve cold cases. Although Sandra was on an upward trajectory, she’s been convinced to give this project a chance. I think it is sold as having potential to put a nice feather in her professional cap. Gerry is convinced because he needs the money to pay child support. Brian needs to be consumed with work to keep himself sane so he jumps at the chance. Jack is lost without his beloved Mary and agrees because he has nothing better to do in his solitude. As the team members orient themselves to each other and solve a few cases, things begin to fall together with them. All three guys don’t take Sandra very seriously until they begin to see she’s a tough bird who isn’t going to tolerate any guff from any of them. What follows is a grudging admiration for her management and crime-solving skills, that over time becomes a trusting and bonding for all of them. That said, it doesn’t mean she doesn’t have to bust their chops from time to time.

Impressions: My years as a team member in a juvenile probation department has me very much appreciating, “New Tricks.” When you’re dealing with dangerous crimes and criminals you had better know your co-workers have your back. I love how they all work together. They team up all sorts of ways, from two-somes, three-somes, or all-somes. They also frequently socialize together after work. They are available to each other 24/7, as you never know when a piece of the puzzle falls together and you want to share it with your buds. I love the humor in the show also. Brian is the most obvious nutcase that gets into some way-out situations, but all of them play into the humor together. Sandra has the cosmos in her eyes and her expressions are priceless. Gerry has some hilarious expressions and situations also. Jack is the most serious one of the bunch but even he lightens up from time to time.

In conclusion, the combined investigative experience of the team is impressive, and they all have long memories from their earlier work days. It really comes in handy when they are investigating long-cold cases. I also don’t think I’ve ever seen a TV series that focuses only on cold cases. I love the title, and I love the unspoken message that older people still have a lot to give to better their communities.

Etc.: filmed in London; The theme song for the series is performed by Dennis Waterman (Gerry Standing). The song “End of the Line” is originally by the Traveling Wilburys. I’m very sorry to say I just learned that Dennis Waterman, who played Gerry, passed away on 5/8. After watching a YouTube (https://youtu.be/q8Hmp5lvF4A) I also learned that he was once considered the “hottest man on TV.”