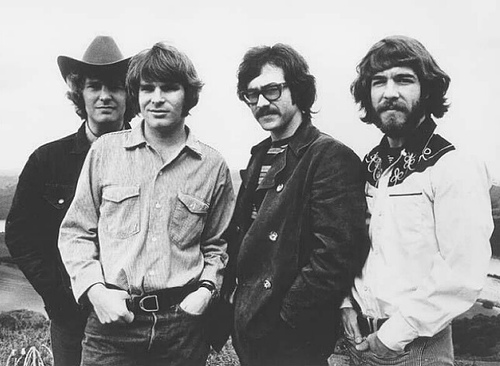 If I had to pick a favorite song of Creedence Clearwater Revival it would be hard… but this song would be a contender and probably my overall favorite. It’s the way Fogerty wearily sings the lyrics, he sounds so much older than he was at the time. The song is off of the “Green River” album.

Sometimes lines grab my attention and these did. Met myself a comin’ county welfare line. I was feelin’ strung out, Hung out on the line.

The album did very well…the Green River album peaked at #1 in the Billboard Album Charts, #2 in Canada, and #20 in the UK in 1969. If you want proof that life isn’t fair… Green River the title track was kept from #1 because of the novelty bubblegum song “Sugar, Sugar” by The Archies.

With Creedence…you won’t hear any “alternative takes” with the band. Fogerty destroyed all copies of the first version of songs because he never wanted any of his outtakes to make it into the public’s hands. This has been a regular practice of him throughout his career.

Jeff Tweedy of Wilco has cited this as a song that had a profound influence on him. A huge Fogerty fan, Wilco credits him with forming the foundation of the Americana genre.

John Fogerty: “Inspired by my young wife at the time. It was early ’69, and I was 23 years old. We had our first child, who, at the time, was two and a half. I was sitting in my room, writing the songs, pushing my career. Without the songs, the career ends. You might be a great band, but without the songs, you’re not going anywhere. At one point, my wife and I had a mild misunderstanding, I wouldn’t even call it a fight, She was miffed, taking our young son out, wishing I would be more involved. But there I was, the musician manic and possessed the only guy holding things up. Without me, it all collapses, so I’m feeling quite put upon. As she walks out the door, I say to my self, “I wrote a song for everyone, and I couldn’t even talk to you.” I looked at my piece of paper and changed gears. How many great leaders can’t even manage their own families? So I went with that. “Pharaohs spin the message/Round and round and true/Richmonds about to blow up” referring to nearby Richmond, California. It was actually a true emotion that took on a larger meaning. It’s still a special song in the sense that it keeps my feet on the ground. You sit and write these songs, yet you try to talk to your own son and daughter and maybe you’re totally inadequate, trying to explain life to a child. We used to record our album very quickly and I remember finishing five different songs in one afternoon. The fifth one didn’t work, and that was “Wrote A Song For Everyone.” I had to start over on that one.”

“Wrote A Song For Everyone”

Met myself a comin’ county welfare line.
I was feelin’ strung out, Hung out on the line.
Saw myself a goin’, down to war in June.
All I want, All I want is to write myself a tune.

Got myself arrested, Wound me up in jail.
Richmond ’bout to blow up, communication failed.
If you see the answer, now’s the time to say.
All I want, All I want is to get you down to pray.

Saw the people standin’ thousand years in chains.
Somebody said it’s diff’rent now, look, it’s just the same.
Pharoahs spin the message, round and round the truth.
They could have saved a million people, How can I tell you?

29 thoughts on “Creedence Clearwater Revival – Wrote A Song For Everyone”