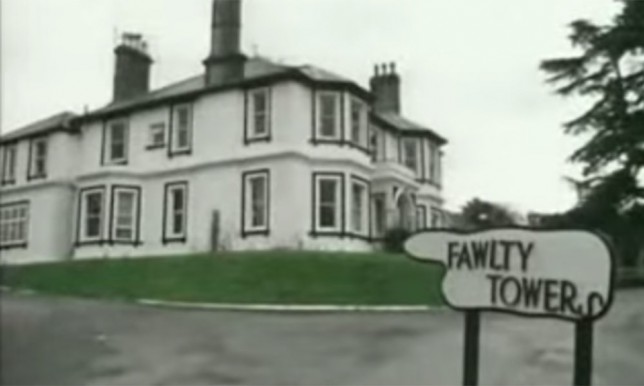 This is my second selection in the first round of the SlicetheLife TV Draft. And my choice is Fawlty Towers.

A great BBC sitcom…some have rated it as the best BBC sitcom ever.
The series is quick, well written and well-acted. The show was made in the mid and late seventies after John Cleese left the Monty Python TV series. I watched it when our PBS station carried it in the 80s.

There is not a bad episode of Fawlty Towers. John Cleese and his wife Connie Booth wrote all of the episodes. The scripts are solid and there is some physical comedy blended in with Sachs and Cleese. Cleese and Booth spent two-and-a-half weeks working out each plot before they wrote a single line of dialogue, generally spending the time most sitcom writers used for a whole series on a single episode.

Fawlty Towers centered around Basil… a rude, class-conscious hotel owner with a domineering wife Sybil a commonsense maid Polly, a Spanish waiter Manuel who could not understand English and took Basil’s abuse, and a retired senile military officer Major Gowen.

Cleese and Booth were inspired by the manager of a real Torquay hotel, Gleneagles, where they had stayed while filming Monty Python. They found the manager, Donald Sinclair, to be entertainingly rude. There were only 12 episodes made…two seasons with six episodes each. Instead of milking it dry they stopped at 12 because Cleese and Booth didn’t think they could write anymore up to the standards they set.

My favorite episode is the 6th episode of the 1st season called The Germans. The episode is a classic.

Basil Fawlty (John Cleese) – Basil seems to spend most of his life alternating between fawning over any guest who he perceives as being worthy of his attention, and then trying to berate them when they didn’t quite have the social standing, he first thought they had. Basil’s trouble is that he thinks his hotel is a higher-class establishment than it really is. The real thorn in his life is his wife Sybil. For all of his bluster, Basil can quickly be brought into line with a curt “Basil!” or two from Sybil. Basil never could stand up to his evidently better half.

Sybil Fawlty (Prunella Scales) – She spends her time keeping a tight rein on her husband Basil. She never misses an opportunity to close off an avenue of pleasure for Basil, such as betting on the horses.  She can be domineering and controlling but with Basil you can’t blame her.

Polly Sherman (Connie Booth) – She probably has more common sense than anyone in the hotel. She struggles to calm down Basil, placate Sybil, and to instruct Manuel.

Manuel (Andrew Sachs) – Poor Manuel takes Basil’s abuse constantly. He was the waiter, bell-boy, porter, and all around do anything guy. Basil hired him with the intention of teaching him English because he’s cheap, but due to Basil’s only rudimentary grasp of Spanish it goes wrong.

Major Gowen (Ballard Berkeley)- A very forgetful retired Major who is a constant guest at the hotel.

Miss Gatsby and Miss Tibbs (Gilly Flower and Renee Roberts,) – They are two sweet natured spinsters who have taken a fancy to Basil, feeling that they need to take care of him.