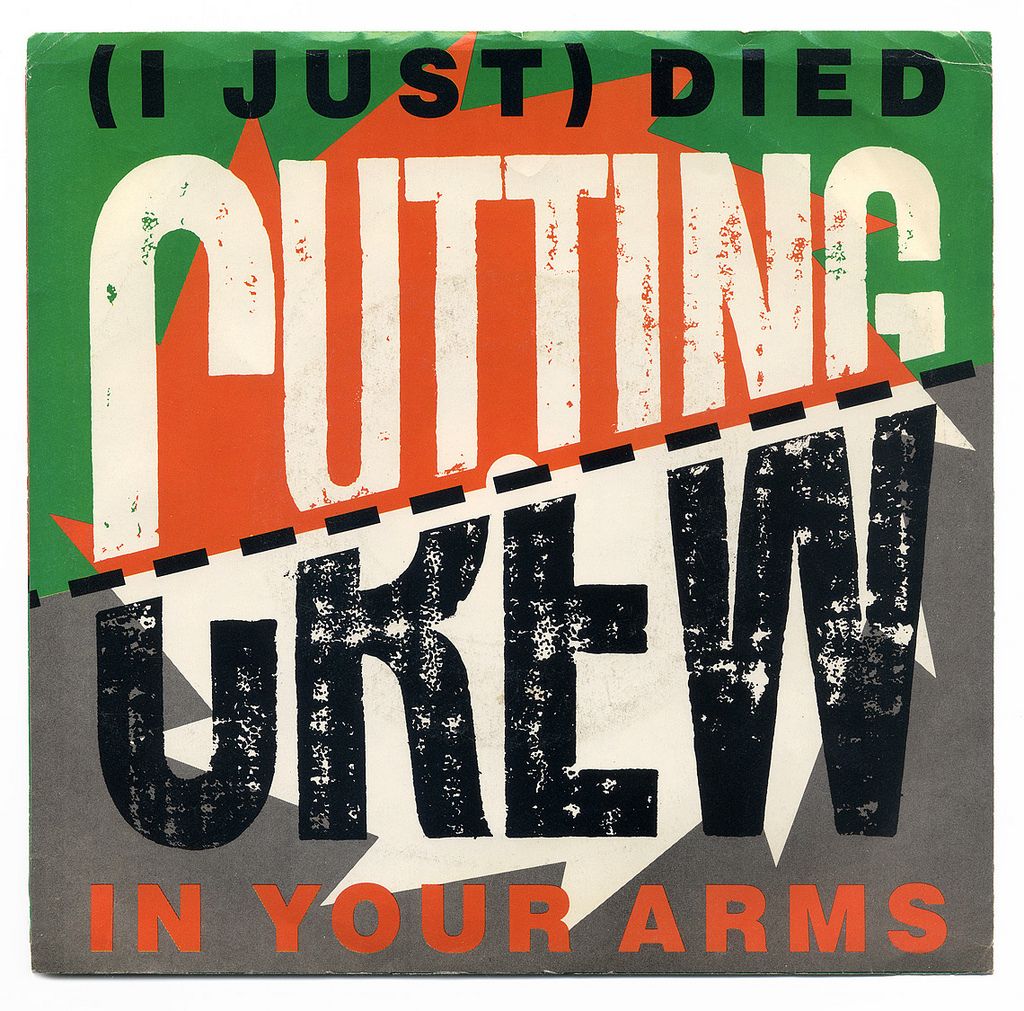 I hardly ever post #1 songs but when this song came out our radio station liked it. No they LOVED IT. I kid you not it was on every hour. It got to be a running joke with my friends on how many times we would hear this song in an afternoon.

It was either this song or the Outfield song “Your Love”…they were a year apart but they seemed joined at the hip on our rock radio station. The two songs had distinctive openings…Oh I, I just died in your arms tonight and Josie’s on a vacation far away…

Our band was playing in a bar at this time and we would just play the opening line and mock it… Oh I, I just died in your arms tonight It must have been something I ate… everyone applauded and laughed because they were as tired of it as we were.

After a few years I hardly heard it anymore and then something  happened…I started to like it…a lot!  It is a fun 80s style power pop song that I probably liked when I first heard it but I heard it too many times back then. It was written by Cutting Crew lead singer Nick Van Eede.

They formed in London in 1985 and hit big with their first album Broadcast with two hit singles.

Nick Van Eede:“Yes, I cannot tell a lie. It’s a song written about my girlfriend (who is actually the mother of my daughter). We got back together for one night after a year apart and I guess there were some fireworks but all the time tinged with a feeling of ‘should I really be doing this?’ Hence the lyric, ‘I should have walked away.

I know it sounds corny but I awoke that morning and wrote the basic lyrics within an hour and wrote and recorded the demo completely within three days.”

Richard Branson started Virgin Records in England in 1972, but it wasn’t until 1987 and the release of Cutting Crew’s Broadcast album that Virgin broke through in America. Nick Van Eede told us about his experience with the record company: “We were signed to Siren records which was part of Virgin so we were always a little bit on the outside but it was the ’80s and they certainly put their money where their mouth was. We were flown to New York for the initial recordings of the album and this is where we got a great recording of ‘I’ve Been In Love Before.’ Then we were flown to Australia to shoot videos… all a bit crazy really. We gave them their first US #1 with ‘(I Just) Died In Your Arms’ but the company soon outgrew us as music stars were changing in the early ’90s. We wrote one slightly veiled song having a pop at US A&R antics in our ‘Between A Rock And A Hard Place’ from The Scattering (1989) album. I sang, ‘I got a brick but I can’t find a window,’ as they continually blocked our album’s release for months making us lose so much momentum.”

Mika used a great deal of this song on his 2007 track “Relax (Take It Easy).” Says Nick: “I know as well as any other song writer that these things can happen and its just the way of the composing world. I am completely confident Mika stumbled in to it accidentally and I am proud to be given the co write… Kerching!!!”

This song has been sampled or interpolated by a number of rap and R&B artists. Jay-Z did a remake of the song, and Amerie used it on her track “I Just Died.”

This was used in the Stranger Things episode “Suzie, Do You Copy?” (2019) and the Cold Case episode “Lonely Hearts” (2006). It also appears in these movies:

In a 2020 Planters commercial that aired during the Super Bowl in 2020, Matt Walsh and Wesley Snipes are riding the Peanutmobile, singing along as this song plays on the radio. Mr. Peanut is driving. When he swerves to avoid an armadillo, the vehicle goes off a cliff and the three are left hanging by a tree. To save the others, Mr. Peanut plunges to a fiery death. His elegy reads: “Mr. Peanut. 1916-2020.”

(I Just) Died In Your Arms

I keep lookin’ for somethin’ I can’t get
Broken hearts lie all around me
And I don’t see an easy way to get out of this
Her diary, it sits by the bedside table
The curtains are closed, the cats in the cradle
Who would’ve thought that a boy like me could come to this

Is there any just cause for feelin’ like this?
On the surface, I’m a name on a list
I try to be discreet, but then blow it again
I’ve lost and found, it’s my final mistake
She’s loving by proxy, no give and all take
‘Cause I’ve been thrilled to fantasy one too many times

It was a long hot night
She made it easy, she made it feel right
But now it’s over, the moment has gone
I followed my hands not my head, I know I was wrong

30 thoughts on “Cutting Crew – (I Just) Died In Your Arms ….Power Pop Friday”