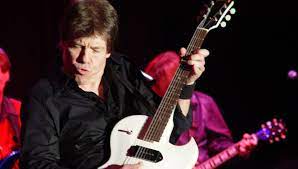 Wanted Man was written by Bob Dylan and it is a favorite of mine. I first heard it by George Thorogood. The first time I heard it was not the studio version that George did…it was when he played it on the 30th Anniversary Bob Dylan concert held in 1993. George’s version of Wanted Man was left off of the CD for some reason…but I knew I had to find that Dylan song as soon as I heard it.

This was pre-internet and I finally found out that Dylan never recorded it for an album. To this day I’ve never heard a version of only Bob singing it… not even a demo of just him.

From what I’ve read about the song Bob Dylan wrote Wanted Man for Nashville Skyline but no complete version of the song was recorded at those sessions. Johnny Cash covered the song and he announced it as a song that him and Dylan wrote together but the records show that Dylan copyrighted it according to a couple of websites.

Cash debuted “Wanted Man” on his 1969 live album, At San Quentin, and would later release a studio version.

George Thorogood released his version on his 1982 Bad To The Bone album released in 1982. The word play in this song is great.

Below I have George’s version of course but I also have Johnny Cash and Bob Dylan demo of the song.

Well, I might be in Colorado
Or Georgia by the sea
Workin’ for some man who may not know who I might be
Yeah, and if you see me comin’
And you know who I am
Don’t you breathe it to nobody
Cause you know I’m on the lam

Well, I got sidetracked in El Paso
Stopped to get myself a map
I went the wrong way into Juarez
With Juanita on my lap
And I went to sleep in Shreveport
Woke up in Abilene
Wonderin’ why the hell I’m wanted
At some town halfway between