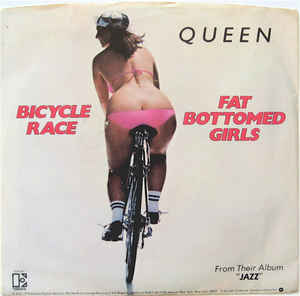 I first heard this song in the seventies and then owned it when I got Queen’s greatest hits and I wore the grooves out in the vinyl. The guitar tone and Freddie’s voice are perfect.

The cover of the single featured a nude woman riding a bicycle, and was altered after many stores refused to stock it. The new version was the same image with panties drawn over the woman…kill joys.

Queen guitarist Brian May wrote this song, which is about a young man who comes to appreciate women of substantial girth. May told Mojo magazine October 2008: “I wrote it with Fred in mind, as you do especially if you’ve got a great singer who likes fat bottomed girls… or boys.”

Each song has a reference to the other in the lyrics: in “Bicycle Race,” a lyric runs: “Fat bottomed girls, they’ll be riding today, so look out for those beauties, oh yeah.” In “Fat Bottomed Girls” the closing call shouts “get on your bikes and ride!,” linking the two songs together.

This song was covered by Antigone Rising for the 2005 Queen tribute album Killer Queen.

The song was used as the opening theme for Morgan Spurlock’s 2004 documentary Super Size Me.

This was used in episodes of the US TV shows Nip/Tuck and My Name is Earl, and also in the UK show Father Ted.

A funny incident involving this song occurred on the Daily Politics show on UK TV in January 2014, when respectable political editor Nick Robinson’s iPad suddenly started to play the song midway through a panel discussion between several politicians. Robinson hastily turned the device off before – in his words – “the really embarrassing lyrics start.”

This is one of a very small number of Queen songs composed and performed in an alternative tuning to standard. Brian May used a Dropped D tuning for this song.

Surprisingly for such a popular song, it only features on one Queen live compilation from the original lineup: On Fire Live at the Bowl, from Milton Keynes 1982. On the Queen + tours, it has been a regular staple, with both Paul Rogers and Adam Lambert handling the lyrics with gusto. Versions featuring Paul Rogers on vocals appear on Return of the Champions (2005), Super Live in Japan (2006) and Live in Ukraine (2008).

Kevin Fowler did his rendition of the classic Queen song on his 2002 album High on the Hog. Fowler’s version is a lighthearted take and encourages the crowd to partake in the fun.

(One, two, three, four!)
Are you gonna take me home tonight?
Oh, down beside your red firelight
Are you gonna let it all hang out?
Fat bottomed girls
You make the rockin’ world go ’round

Hey!
I was just a skinny lad
Never knew no good from bad
But I knew life before I left my nursery, huh
Left alone with big fat Fanny
She was such a naughty nanny
Big woman, you made a bad boy out of me

I’ve been singing with my band
Across the wire, across the land
I seen every blue eyed floozy on the way, hey
But their beauty and their style
Went kind of smooth after a while
Take me to them dirty ladies every time

Now I got mortgages and homes
I got stiffness in my bones
Ain’t no beauty queens in this locality, I tell you
Oh, but I still get my pleasure
Still got my greatest treasure
Big woman, you done made a big man of me

Get on your bikes and ride!
Like a cowboy, oh, come on, hey, go, aw yeah
That’s the way I like it, yeah
Yes, yes! Them fat bottomed girls
You ride ’em, you ride ’em, hey hey! Alright
Ooh! Ooh yeah, ooh yeah
Alright