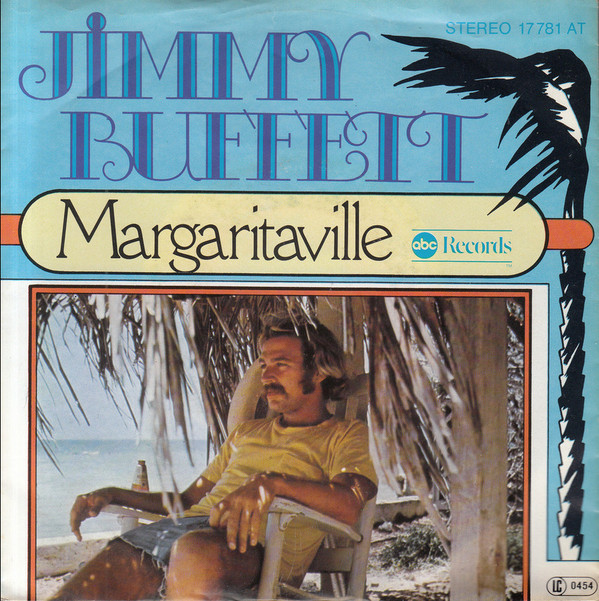 Yes it’s wore out but I still love it. One of my favorite lyrics comes from this song. I blew out my flip flop, Stepped on a pop top, Cut my heel had to cruise on back home. I don’t know why but I just love that line.  When Buffett wrote this he wrote his career. He had hits before but this one changed everything.

I’ve seen Jimmy Buffett twice and it’s like going to a giant beach party. If you ever get a chance it’s a fun concert to go to. I’ve only owned one album by Buffett. “Songs You Know By Heart” a greatest hits collection released in 1985. It has everything I like except one song…Door Number 3.

Buffett wrote this song in Key West, Florida, after he finished a tour with his group, the Coral Reefer Band. They had just toured Texas, and Buffett spent some time drinking margaritas in a Mexican restaurant with a friend before going back to Key West. When he got there, he sat at the Old Anchor Inn watching a traffic jam on the roads and used it as inspiration as he composed the song.

Buffett recorded this song at Criteria Studios in Miami with producer Norbert Putnam.

Producer Norbert Putnam: “One day in the studio, he comes in and starts telling me about a day he had in Key West. He was coming home from a bar and he lost one of his flip-flops and he stepped on a beer can top and he couldn’t find the salt for his Margarita. He says he’s writing lyrics to it and I say ‘That’s a terrible idea for a song.’ He comes back in a few days later with ‘Wasted Away Again In Margaritaville’ and plays it and right then everyone knows it’s a hit song. Hell, it wasn’t a song – it was a movie.”

Regarding the success of this song, Buffett said: “I was lucky enough to get my thumb on the pulse beat of what people perceived the tropics to be.”

“Margaritaville” has come to symbolize a carefree Caribbean lifestyle – what some in Key West call “Keys disease.” For many, the only time they experience this way of living is on vacations or at Jimmy Buffett concerts. Buffett has a lot of fans who work very hard, make a lot of money, and use his music as an escape.

Buffett was born in Mississippi and raised in Alabama. He didn’t come to Key West, Florida, until 1971, when he was 24 years old. As a transplant, he had a perspective on the area that natives don’t, which helped him capture the ethos in this song.

Buffett has always loved sailing, and when this song became a hit, he was thrilled because he could buy his own boat. He has said that even if he was a one-hit wonder, he would have been happy with his boat sailing around the islands.

When Buffett sings about how he “Stepped on a pop-top” and cut his heel, requiring a cruise back home to enjoy a margarita, he’s referring to pull-off tops from soda and beer cans that caused a litany of minor injuries as they were often thrown on the ground and then stepped on by poor souls who blew out their flip-flops. In the late ’70s, the pop-tops were replaced with much safer non-removable round “pop-down/pop-in” tabs.

Buffett owns Margaritaville stores in Key West, New Orleans, Jamaica, Charleston, and Orlando. They sell clothing and other items inspired by the song.

Former Van Halen vocalist Sammy Hagar covered this for his 2013 Sammy Hagar & Friends album. His version is a duet with Toby Keith. He told Rolling Stone that it took him a long time to figure out that the country star would be a good fit for his version. “He’s like my closest friend,” said Hagar, “in country, for sure, and one of the most typical Cabo Wabo heads. We’ve sat in Cabo Wabo and played ‘Margaritaville’ there 35 times, if not more. And to not realize until after I cut ‘Margaritaville’ that I should get Toby to do the duet on it?”

This cover is also included as a bonus track on the Deluxe version of Toby Keith’s Drinks After Work album.

In 2016, this was inducted into the Grammy Hall of Fame.

This is referenced in Blake Shelton’s 2004 hit “Some Beach,” which finds Shelton “Singing ‘Margaritaville’ and minding my own.”

In 1999, Buffett joined Alan Jackson in a recording of this for Jackson’s album Under The Influence. In Buffett’s original version, he knows wasting away in Margaritaville is his own fault, but in Jackson’s version the singers blame each other before they finally admit “it’s our own damn fault.”

In The Simpsons episode “Simpsoncalifragilisticexpiala(Annoyed Grunt)cious” (1997), this is sung by the nanny Shary Bobbins and Barney Gumble.

It was also used in these TV shows:

And in these movies: