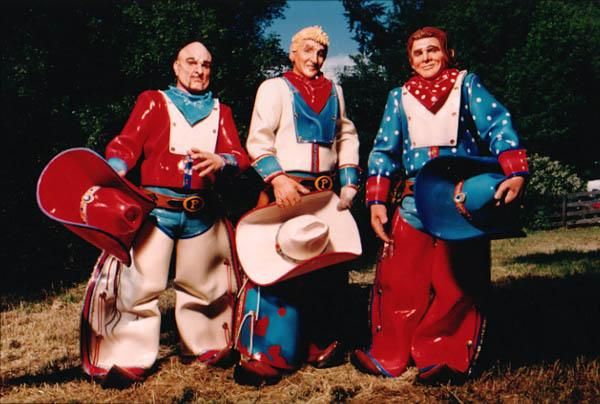 Being a bass player and a love for the bizarre this song has stuck with me. Les Claypool is a terrific bass player and this 1995 song added great bass playing with the odd song and I was onboard. It’s not a song I would pop in at any time…the video for me makes this song…and I hardly ever say that…but I do like the song.

I saw the video before I ever heard the song on radio…it just kept my attention all the way through over and over again. It was a Devo kind of attention getter…video wise that is.

At the time there were rumors that this song was about the actress Winona Ryder. Les Claypool denied this in interviews, pointing out that his Wynona is spelled differently and insisting the song has nothing to do with her. Ryder’s then-boyfriend, Soul Asylum singer Dave Pirner, didn’t buy it. He took offense and renamed one of his songs “Les Claypool’s A Big F–king Asshole” in concert. The song must have hit a nerve!

The song was written by Les Claypool, Larry LaLonde, and Tim Alexander. Primus has never had a Hot 100 hit, but this is one of their most popular songs, peaking at #12 Billboard  Alternative Charts and #23 on the Mainstream Rock chart.

Now the video! You just have to watch it. I will say whoever made those suits did a great job.

Les Claypool: “I was fly fishing with a friend of mine up in Lassen County (California), and the sun was going down and we were heading back to the car,” he said. “He was off in one direction, and I went off in another direction. I come around this corner and I step into the creek. And just as I spied this thing, it spied me. It was this big, furry mass coming my way. It flipped and popped its tail and scared the s–t out of me, and I scared the s–t out of it. It was this giant beaver. I mean, it was huge.”

“It just happened that I had this bass part with all these triplets in it and it kind of fit real well with those lyrics,”  “So when we did Punchbowl, we put the two together and that became the ‘Wynona’s Big Brown Beaver’ that everybody came to know.”

Nice beaver.
Thank you. I just had it stuffed.

This exchange is from the 1988 movie The Naked Gun, where Leslie Nielsen is admiring Priscilla Presley’s taxidermied beaver.

So it kind of got in my head. This big brown beaver, big brown beaver. Okay. Well, how can I make a song out of that? And then it became, ‘Wynona’s got herself a big brown beaver.’ And from there it just built into this little mythological character that obviously had a little double entendre to it.”

The band had much more modest ambitions for the song when they conceived it, at first considering it one of the filler pieces the band sometimes puts between their proper songs for comic relief.

The video was quite a production. Shot at a time when record companies were willing to shell out big bucks for videos (which MTV still played), this one featured the band in foam rubber suits dressed like cartoon cowboys. The film was shot 25% slower than normal (18 frames-per-second instead of 24) to create a sped-up, jerky look to match the cartoon theme when it was played back. This meant that the band had to mime to the song at a slower speed, so the song was played 25% slower so they could match their movements.

The band had some trouble convincing MTV to play it – Claypool says he met with a woman at the network who asked him some questions about the song. MTV ended up nightparting it.

Claypool says this song was “the bane of my existence for a while” because it made those who weren’t au fait with Primus assume they were a joke band. He eventually realized that those who didn’t get it never will, and decided to pay them no mind.

Les Claypool’s sideband Duo de Twang recorded this song on their 2014 debut album Four Foot Shack. This version was similar to the original vision of the song, which was more stripped-down.

Wynona’s got herself a big brown beaver and she shows it off to all her friends.
One day, you know, that beaver tried to leave her, so she caged him up with cyclone fence.
Along came Lou with the old baboon and said “I recognize that smell,Smells like seven layers,That beaver eatin’ Taco Bell!”.

“Now Rex he was a Texan out of New Orleans and he travelled with the carnival shows.
He ran bumper cars, sucked cheap cigars and he candied up his nose.
He got wind of the big brown beaver So he thought he’d take himself a peek,but the beaver was quick and he grabbed him by the kiwis,
and he ain’t pissed for a week.(And a half!)

Wynona took her big brown beaver and she stuck him up in the air, said “I sure do love this big brown beaver and I wish I did have a pair.
Now the beaver once slept for seven days And it gave us all an awful fright,
So I tickled his chin and I gave him a pinch and the bastard tried to bite me. Wynona loved her big brown beaverAnd she stroked him all the time.
She pricked her finger one day and it occurred to her she might have a porcupine.