I’ve always liked when Pete would take the lead vocals in songs. This song is on the album Tommy…In the movie Tommy, Tina Turner plays the part and sings it like only Tina can.

In the story the Acid Queen tries to cure Tommy the deaf, dumb, and blind kid but fails. The Acid Queen fails to heal Tommy, just as the way of excess and indulgence never brings lasting spiritual transformation. Pete wanted it known it was a dead end.

Pete followed the teachings of Meher Baba…an Indian guru that Townshend had been studying under since 1968. Meher Baba believe that acid and the like were unproductive for spirituality, he felt they were immensely detrimental and destructive.

Tina Turner also released a cover of this song as the third single from her The Acid Queen album. 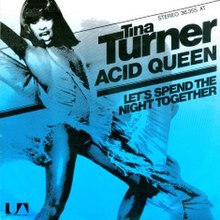 “The Acid Queen” is an important song in the Who’s rock opera Tommy. In that album, the title character is “deaf, dumb, and blind,” with “dumb” being an archaic (and, in modern times, offensive) way of saying “mute.” Tommy eventually becomes a master at the game of pinball, as summarized in the album’s signature song “Pinball Wizard.”

In their quest to cure their son, Tommy’s parents take him to see a character called the Acid Queen. She’s an outsider figure who offers to liberate Tommy’s mind with drugs and sex.

The word “acid” is almost universal slang for the psychedelic drug LSD, which was the biggest shaping force of the ’60s counterculture. In the ’60s, rightfully or wrongfully (probably wrongfully), acid wasn’t looked at as a recreational drug so much as a way to elevate consciousness and “free” one’s mind.

The Acid Queen, as with the Tommy story as a whole, seem almost ridiculous until you understand what Who guitarist and songwriter Pete Townshend was doing with them.

The character Tommy is meant to represent the average human being who is spiritually and psychologically deaf, blind, and mute in the sense that we are clouded by petty ambitions and lusts and are unable to see the full depth and breadth of reality.

The Acid Queen, meanwhile, represents one method for escaping those limitations – the way of drugs and excess, or “sex, drugs, and rock and roll” as a popular slogan of the era went.

This isn’t the only Who song Baba influenced. His name is even right there in the title of “Baba O’Riley.”

Townshend sings lead vocals on this one. That arrangement wasn’t entirely unheard of for The Who, but Roger Daltrey was the official lead singer of the band and is the voice of most of their songs.

I’m the gypsy, the acid queen
Pay me before I start
I’m the gypsy and I’m guaranteed
To mend his aching heart

Give us a room, close the door
Leave us for a while
You won’t be a boy no more
Young, but not a child

To tear your soul apart

My work’s been done, now look at him
He’s never been more alive
His head it shakes, his fingers clutch
Watch his body writhe

To break your little heart

To tear your soul apart