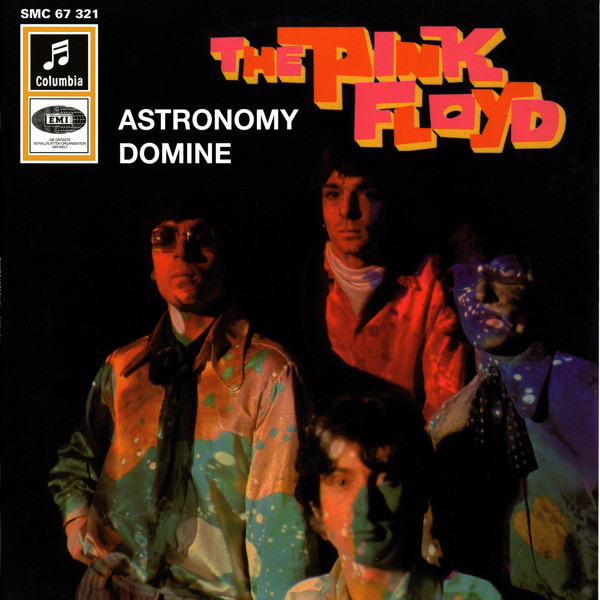 Lime and limpid green, a second scene
Now fights between the blue you once knew

This was the opening song on The Piper At The Gates Of Dawn…which  was Pink Floyd’s first album; the title came from a chapter heading in The Wind In The Willows, a children’s book written by Kenneth Grahame and published in 1908.

The song was written by founding member and original band leader Syd Barrett. The song starts with some  Morse Code  and it turns out to be a catchy pop tune. You can hear the future of Pink Floyd in parts of this song.

Pink Floyd drummer Nick Mason: “This is such a great drum track in an interesting time signature. It’s a fantastic bit of ’60s philosophy mixed with a sort of psychedelic lyric.”

“Astronomy” is the study of celestial bodies, and to “domineer” is to control something in an arrogant way. So “Astronomy Domine” means to control space for personal needs. This probably represents the space race between the United States of America and the Union of Soviet Socialist Republics during the Cold War era.

This was written by Syd Barrett, who was the group’s primary songwriter at the time. A founding member of Pink Floyd, his mental health started deteriorating a short time after this was released, and by 1972 he was out of the band, doing gardening instead of leading one of the foremost bands in Britain. Pink Floyd went on to far greater success without him, but the songs he wrote represent some of the more adventurous music of the era and show sparks of the genius many believe he could have become.

Oberon, Miranda and Titania” are all moons of Uranus and are also characters in Shakespeare’s plays (Oberon and Titania, King and Queen of the Fairies in A Midsummer Night’s Dream; Miranda, daughter of Prospero in The Tempest). “Titan” is the largest moon of Saturn.

Regarding the lyrics, “Stairway scare, Dan Dare, who’s there?” Dan Dare is a British science fiction comic hero created by illustrator Frank Hampson, and is referenced in this song with obvious references to Space, planets, and their moons. Syd Barrett’s guitar is also suggestive of the brass motif from “Mars, the Bringer of War” in Gustav Holst’s The Planets.

There is some Morse code at the beginning of this song, which was a way to transmit messages using a series of long and short tones. Plenty of people tried to decipher the code in this song, only to realize it was just a random series of tones with no meaning.

Lime and limpid green, a second scene
Now fights between the blue you once knew
Floating down, the sound resounds
Around the icy waters underground
Jupiter and Saturn, Oberon, Miranda and Titania
Neptune, Titan, stars can frighten