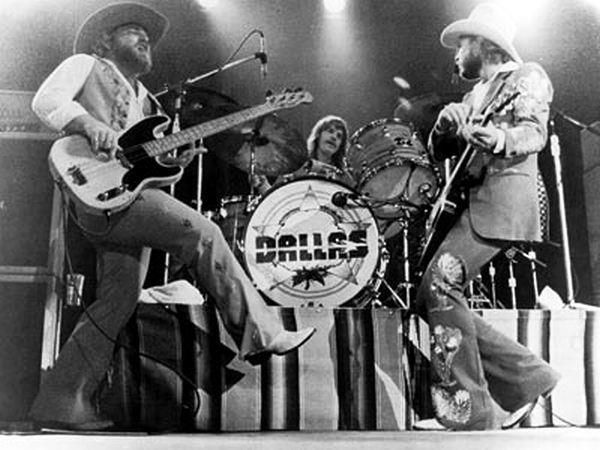 The Fandango album was my first introduction to ZZ Top. The album was half live and half studio. This one and Tush were my favorites of the album.

This song is a tribute to the “Border Blaster” radio stations in Mexico, specifically the two that were run by the famous disc jockey Wolfman Jack, XERF in Via Acuna, , and XERB, (in Rosarito Beach near Tijuana).

Mexican radio stations did not have to adhere to the power limits of US stations, which gave them the ability to pump their signal well into the States.

This song was on the Fandango album and was not released as a single. The album peaked at #10 in the Billboard Album Chart and #60 in the UK.

The album was helped by the hit single Tush that peaked at #20 on the Billboard 100.

Billy Gibbons: “All Mexican stations’ call letters begin with X. The X stations used to be heard everywhere because of their enormous power. The Mexican government granted licenses with no wattage ceiling. The US, back in the ’20s, established 50,000 watts as the maximum. WLS in Chicago is 50,000 watts, and you can hear it like a police call in Houston. I’m sure 500,000 watts you can pick up here in Canada. You can probably pick up XERF. It was just outrageous. You could pick it up everywhere and we’d go. And it would bury everything else. KDRC in Houston was on a close frequency, and they would get stomped on. They had to move. XERF is 1570 on the dial. I think that remains the most powerful station.”

Dusty Hill: “They’ll sell segments to anybody. There are a lot of preachers on there. I heard them one time selling autographed prayer cloths. They were to put on your radio when you’re listening to these programs. But this one was autographed by Jesus himself. Then you’d hear a 15-minute country western show. Then there’d be a blues show. You could just buy your slot and do whatever. They didn’t have a whole lot of restrictions.”

Asked if ZZ Top was ever played “on the X,” Gibbons said: “We did, in fact. They do not have a pop music playlist, but the song was brought to the attention of the station owner, who, it turns out, is an attorney in Del Rio who considers the station his favorite toy. He decided to have a 15-minute pop music segment, and we did get played on XERF and then on XERB in Rosarita. They also have XROC in Juarez. So it went full circle. We heard ‘I Heard It in the X’ on the X.”

Heard It On The X

Do you remember
Back in nineteen sixty-six?
Country Jesus, hillbilly blues,
That’s where I learned my licks.
Oh, from coast to coast and line to line
In every county there,
I’m talkin’ ’bout that outlaw X
Is cuttin’ through the air.

We can all thank Doctor be
Who stepped across the line.
With lots of watts he took control,
The first one of its kind.
So listen to your radio
Most each and every night
’cause if you don’t I’m sure you won’t
Get to feeling right.