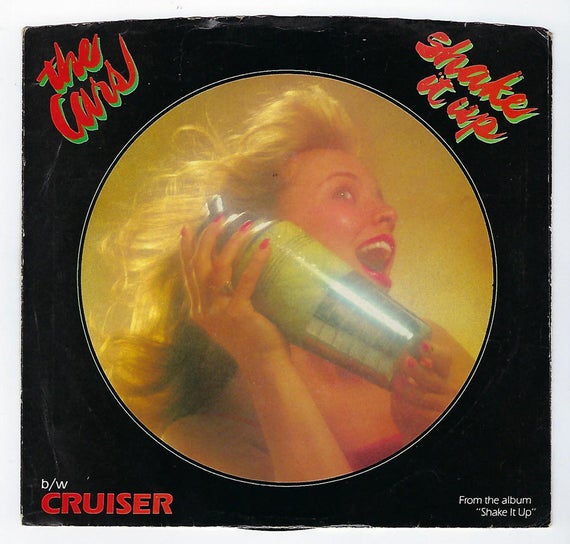 Shake It Up was the title track to The Cars’ fourth album. This was their first top 10 hit which is surprising with all of the well-known songs they had released to this point.

They had been playing around with this song for a few years but they didn’t like the sound of it. They basically started all over and changed the song completely and then worked it out.

The Shake It Up album came out in 1981, just a few months after the first MTV broadcast. The release became a big hit for the Cars, a top 10 album that would eventually go multi-platinum… aided by this song.

The album peaked at #9 in the Billboard Album Chart.

The song is typical Cars…catchy chorus and full of hooks. Ric Ocasek wrote the song but did say he was never too thrilled about the lyrics.

Drummer David Robinson: “We recorded [‘Shake It Up’] a couple of times in the studio and dumped it, and we were going to try it one more time, and I was fighting everybody,” “So we thought, let’s start all over again, like we’ve never even heard it – completely change every part – and we did. Then, when it was through and all put back together, it was like a brand-new song.”

Written by frontman Ric Ocasek, it’s an outlier in that it’s very straightforward, simply encouraging us all to get on the dance floor and boogie like nobody’s watching. Ocasek’s songs were generally far more enigmatic.

This song has some throwback elements, like the “ooo ooo ooo” backing vocals and references to a “quirky jerk” and “night cats” – lingo that was hep in the ’60s when songs about dancing were in vogue. At the same time, “Shake It Up” as a futuristic sound, with synthesizers and drum machines that were part of the new wave.

Released as the lead single from the album, “Shake It Up” was a big American hit for The Cars, getting them into the Top 10 for the first time. Some fans accused them of “selling out,” but the band insisted they were simply progressing (one point in their defense: they continued to live in Boston instead of relocating to New York or Los Angeles). The jabs came mostly from the UK, where the band got lots of positive press early on but faced the wrath of a finicky press when they released this song about dancing. In the UK, “Shake It Up” wasn’t released as a single.

The Cars are one of the groups who can be credited with opening the New Wave sound up to the mainstream. As noted in Seventies Rock: The Decade of Creative Chaos, “The fact that new music was getting airplay at all – New Wave or not – was somewhat remarkable.” When The Cars came on the scene in 1978, the Bee Gees and all the disco craze they brought with them dominated the charts. While mainstream radio was reluctant to put a punk record on the air, it found New Wave less intimidating.

Meanwhile, Ken Tucker muses about the New Wave movement in The Rolling Stone Illustrated History of Rock and Roll: “Kids all over the country decided to play Record Promotion: if the big boys wouldn’t sign up their local bands, the fans would, with a vengeance. Mimeographed manifestos and homemade rock magazines multiplied as ways to push burgeoning local scenes; they plugged cherished unknowns and finessed an ad hoc network for distributing their records.” Notice any similarities with 1978 music culture and the Internet-fostered music scene now?

Shake It Up Demo

Shake It Up Studio Version

Uh well, dance all night and whirl your hair
Make the night cats stop and stare
Dance all night, go to work
Do the move with a quirky jerk

Shake it up, make a scene
Let them know what you really mean
And dance all night, keep the beat
And don’t you worry ’bout two left feet