This song has been covered by so many bar bands that the smell of beer comes with the song.

This was written and originally recorded by no other than J.J. Cale. Clapton gave Cale a huge boost he recorded Cale’s song “After Midnight” in 1970 and released it as his first solo single. This helped earn Cale a record deal.

This was on Clapton’s album Slowhand. The version that was a hit was the live version from Just One Night. 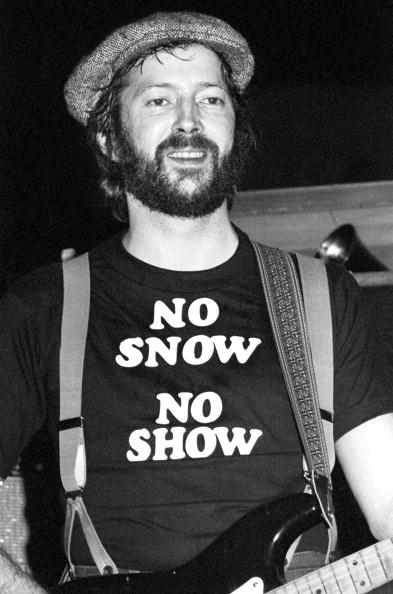 In his autobiography Clapton, Clapton said when he recorded this song he had kicked a serious heroin habit but was filling his body with cocaine and alcohol. His attitude at the time was that he could manage his addiction and quit at any time…he just didn’t want to; that’s why he could sing so objectively about a drug that was consuming him.

After he cleaned up, Clapton removed this song from his setlist because he thought it gave the wrong message about cocaine use. He started playing it again after he rearranged the song to include the line, “That dirty cocaine” into the choruses.

When Clapton was looking for songs for his Slowhand album, he once again looked to Cale, and chose “Cocaine,” which became the first song on the set. Clapton would later cover Cale’s song “Travelin’ Light,” and in 2006, the pair teamed up to record an album together called The Road To Escondido.

The lyrics are about drug addiction, something Clapton knew quite well. As he When he finally did get off drugs and alcohol, he had to learn how to make music while sober, which was a big transition as everything sounded very rough to him. He also realized how damaging his addiction was to himself and others on a personal level, and became active in helping others get through their addictions; in 1998 he opened the Crossroads rehab center in Antigua, where clients go through a 29 day wellness-centered approach to treatment.

During the Slowhand sessions, Clapton and his band got to see a J.J. Cale concert, and Cale brought Clapton on stage to duet on this song.

This is one of Clapton’s most famous songs, but the studio version was never released as a single. Clapton included the song on his 1980 live album Just One Night (Live At Budokhan), and the version from this show was released as the B-side of “Tulsa Time,” which was also taken from the concert. This single charted at #30 in the US.

When J.J. Cale wrote this song, he envisioned it as a jazz number. His producer, Audie Ashworth, convinced him to make it a rocker, which required some overdubbing by Cale, since he played very simple guitar parts. Cale did three single-string overdubs of the riff. He played the bass himself, but had session pro Reggie Young play the guitar solo. Clapton’s version has a much more complex guitar line and vocals that are more prominent in the mix.

After Clapton recorded this song, J.J. Cale saw many new faces at his concerts, but many of them expected him to sound like Clapton. Cale didn’t conform, and took a more laid-back approach to his next album, 5, which was released in 1979. There were no hits on that one, although a Santana cover of one of the cuts, “The Sensitive Kind,” made #56 in 1981.

If you got that lose, you want to kick them blues, cocaine
When your day is done, and you want to ride on cocaine

If your day is gone, and you want to ride on, cocaine
Don’t forget this fact, you can’t get it back, cocaine