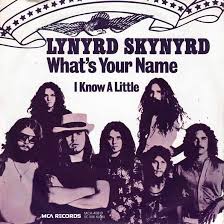 The reason I like this song is caught in the intro. The guitar in this is a lot of fun. Unlike most Lynyrd Skynyrd songs this one was not partly written by Ronnie Van Zant. The new guitar player Steve Gaines wrote this before he joined them.

Gaines replaced Ed King as the band’s guitarist in 1976, but died in the 1977 plane crash that also claimed the lives of lead singer Ronnie Van Zant and Gaines’ sister Cassie, who was a backup singer for the group. This song provides a glimpse of songwriting and guitar talent.

Steve Gaines was a special talent. I personally believe he would have gone far in music outside of that band. There is guitar playing on Street Survivors that you never heard with that band before. Very sophisticated chord patterns and riffs with songs like “I Never Dreamed.”

This song was the B side to What’s Your Name.

You won’t find diatribes on the complexities of interpersonal relationships in the Skynyrd catalog, but you will find simple explanations. This song is a great example.

Why do people get the blues? From digging what they can’t use. And if you want to hold on to a man, a good way to do it is through commitment. You only need to know a little about love – the rest you can guess.

This is a great example of Skynyrd guitarist Steve Gaines’ contributions to the band. He wrote the song himself, and also wrote or co-wrote three other songs on the album. as Van Zant sings about a guy who has a strong feeling that his girl is cheating on him.

Skynyrd guitarist Gary Rossington told Guitar School magazine, July 1993, that he’d never heard anybody, including the current guitarists in the band, play the picking on this song quite right – the way Steve Gaines did.

This is one of many Skynyrd songs that was never released as a single but endured as a classic track in their catalog. It earned lots of airplay on Classic Rock radio and became one of their most popular live songs, performed at most of their shows when they re-grouped after the plane crash.

Steve Gaines recorded this before he joined Lynyrd Skynyrd.

I Know A Little

Well the bigger the city, well the brighter the lights
The bigger the dog, well the harder the bite
I don’t know where you been last night
But I think mama, you ain’t doin’ right

10 thoughts on “Lynyrd Skynyrd – I Know A Little”