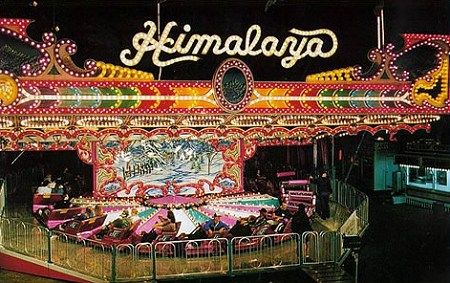 One quick story before the song. When I was 6 years old my dad, mom, sister. and I piled into the car and we all traveled to the carnival. I was so excited…too excited. I was in the backseat and stuck my head out the driver’s side window. My dad was not paying attention…can you see this coming? My dad started to roll the window up and could not understand why it was stuck. My neck was in it and Dad was trying to roll up harder. By this time I could not breathe, my face was turning red, and I was flopping around like a mouse in a trap…my mom yelled at my dad…MAX IS IN THE WINDOW… what? my dad asked…then my mom and sister screamed…MAX IS IN THE WINDOW…in unison no less. I can still hear him….Son…why the hell did you have your head handing out the window? Uh Dad…I wanted out to go to the carnival.

I loved carnivals growing up. At night they were magical with the lights, sounds, and smells.

The Band had a new studio in Bearsville NY to experiment in during the early ’70s. It was opened by their manager Albert Grossman but Robbie Robertson commented that it left them a bit cold. They are also going through drug problems with three members at the time of recording.

Rick Danko in 1993: “I think we shipped a million copies of that second album,”
“And that changed a lot of people’s lives — in particular, the Band’s. After that, we were only getting together once a year, for a couple of months, to record. It was like we were too decadent to play.”

Life Is A Carnival

Hey, buddy, would you like to buy a watch real cheap?
Here on the street
I got six on each arm
And two more ’round my feet

Saw a man with a jinx
In the third degree
From trying to deal with people
People, you can’t see

Hey, buddy, would you like to buy a watch real cheap?
Here on the street
I got six on each arm
And two more ’round my feet