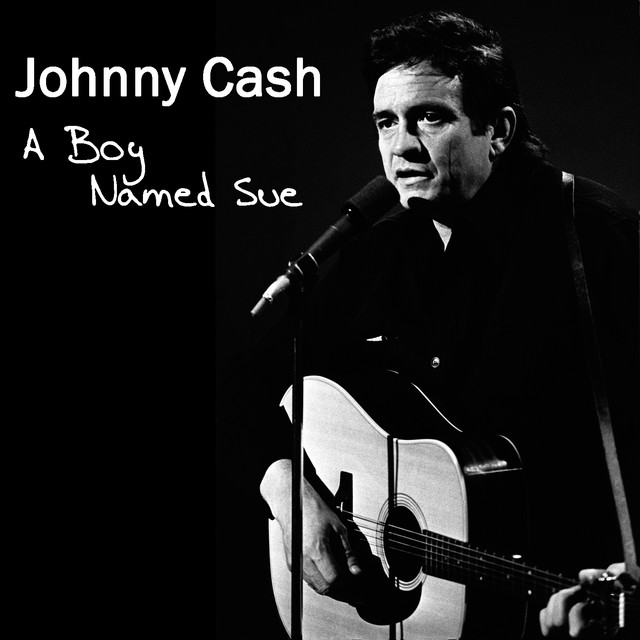 This was written by the multitalented Shel Silverstein, who later wrote several hits for Dr. Hook, including “Sylvia’s Mother” and “Cover Of The Rolling Stone.” He got the idea for the song from his friend Jean Shepherd – a guy who had to deal with a girl’s name.

Shel Silverstein sang his song ‘Boy Named Sue,’ and Johnny’s wife June Carter thought it was a great song for Johnny Cash to perform. And not too long after that they were headed off to San Quentin to record a record Live At San Quentin and June said, ‘Why don’t you bring that Shel song with you.”And so they brought the lyrics. And when he was on stage he performed that song for the first time ever, he performed it live in front of that captive audience, in every sense of the word.

When Johnny performed this song at San Quentin he read the lyrics from a sheet of paper on the stage.

Johnny Cash performed this song in the East Room of the White House on April 17, 1970, when he and his wife were invited by President Richard Milhous Nixon. Nixon’s staff had requested the song along with Okie From Muskogee and the song “Welfare Cadillac,” but Cash refused to perform those songs, saying he didn’t have arrangements ready.

Thanks to Victoria at The Hinoeuma for suggesting this Johnny Cash song.

This is about a boy who grows up angry at his father not only for leaving his family, but for naming him Sue. When the boy grows up, he sees his father in a bar and gets in a fight with him. After his father explains that he named him Sue to make sure he was tough, the son understands.

Cash recorded this live at San Quentin Prison in February 1969. Shel Silverstein’s nephew Mitch Myers told us the story: “In those days in Nashville, and for all the people that would visit, the most fun that anyone really could have would be to go over to someone’s house and play music. And they would do what one would call a ‘Guitar Pull,’ where you grabbed a guitar and you played one of your new songs, then someone else next to you would grab it and do the same, and there were people like Johnny Cash or Joni Mitchell, people of that caliber in the room.

It wasn’t touched up, it wasn’t produced or simulated. They just did it, and it stuck. And it rang. I would say that it would qualify in the realm of novelty, a novelty song. Shel had a knack for the humorous and the kind of subversive lyrics. But they also were so catchy that people could not resist them.”

Shel Silverstein went on to write another song titled “The Father of the Boy Named Sue.” It’s the same story, but from the father’s point of view.

In the 2019 animated film Missing Link, the main character, a male Sasquatch voiced by Zach Galifianakis, is named Susan.

I want you to uh, I want to a,
If you don’t mind Carl, I’d like you to stay out and help us on some songs
I’d love to
One of the greatest guitar players as well as song writers and singers in Memphis
Appreciate a little help on guitar, alright. Thank you Carl

Well,my daddy left home when I was three
And he didn’t leave much to ma and me
Just this old guitar and an empty bottle of booze
Now, I don’t blame him cause he run and hid
But the meanest thing that he ever did
Was before he left, he went and named me Sue

Well, he must o’ thought that is quite a joke
And it got a lot of laughs from a’ lots of folk
It seems I had to fight my whole life through
Some gal would giggle and I’d get red
And some guy’d laugh and I’d bust his head,
I tell ya, life ain’t easy for a boy named Sue

Well, I grew up quick and I grew up mean
My fist got hard and my wits got keen
I’d roam from town to town to hide my shame
But I made a vow to the moon and stars
That I’d search the honky-tonks and bars
And kill that man who gave me that awful name

Well, it was Gatlinburg in mid-July
And I just hit town and my throat was dry
I thought I’d stop and have myself a brew
At an old saloon on a street of mud
There at a table, dealing stud
Sat the dirty, mangy dog that named me Sue

Well, I knew that snake was my own sweet dad
From a worn-out picture that my mother’d had
And I knew that scar on his cheek and his evil eye
He was big and bent and gray and old
And I looked at him and my blood ran cold
And I said, “My name is Sue, how do you do
Now you’re gonna die”

(yeah, that’s what I told him)

Well, I hit him hard right between the eyes
And he went down, but to my surprise
He come up with a knife and cut off a piece of my ear
But I busted a chair right across his teeth
And we crashed through the wall and into the street
Kicking and a’ gouging in the mud and the blood and the beer

I tell ya, I’ve fought tougher men
But I really can’t remember when
He kicked like a mule and he bit like a crocodile
I heard him laugh and then I heard him cuss
He went for his gun and I pulled mine first
He stood there lookin’ at me and I saw him smile

And he said, “Son, this world is rough
And if a man’s gonna make it, he’s gotta be tough
And I knew I wouldn’t be there to help ya along
So I give ya that name and I said goodbye
I knew you’d have to get tough or die
And it’s the name that helped to make you strong”

He said, “Now you just fought one hell of a fight
And I know you hate me, and you got the right
To kill me now, and I wouldn’t blame you if you do
But ya ought to thank me, before I die
For the gravel in ya guts and the spit in ya eye
‘Cause I’m the son-of-a-bitch that named you Sue”

Well what could I do? What could I do?
I got all choked up and I threw down my gun
And I called him my Pa, and he called me his son
And I came away with a different point of view
And I think about him, now and then
Every time I try and every time I win
And if I ever have a son, I think I’m gonna name him..
Bill or George! Any-damn-thing but Sue!

Alright, thank you very much