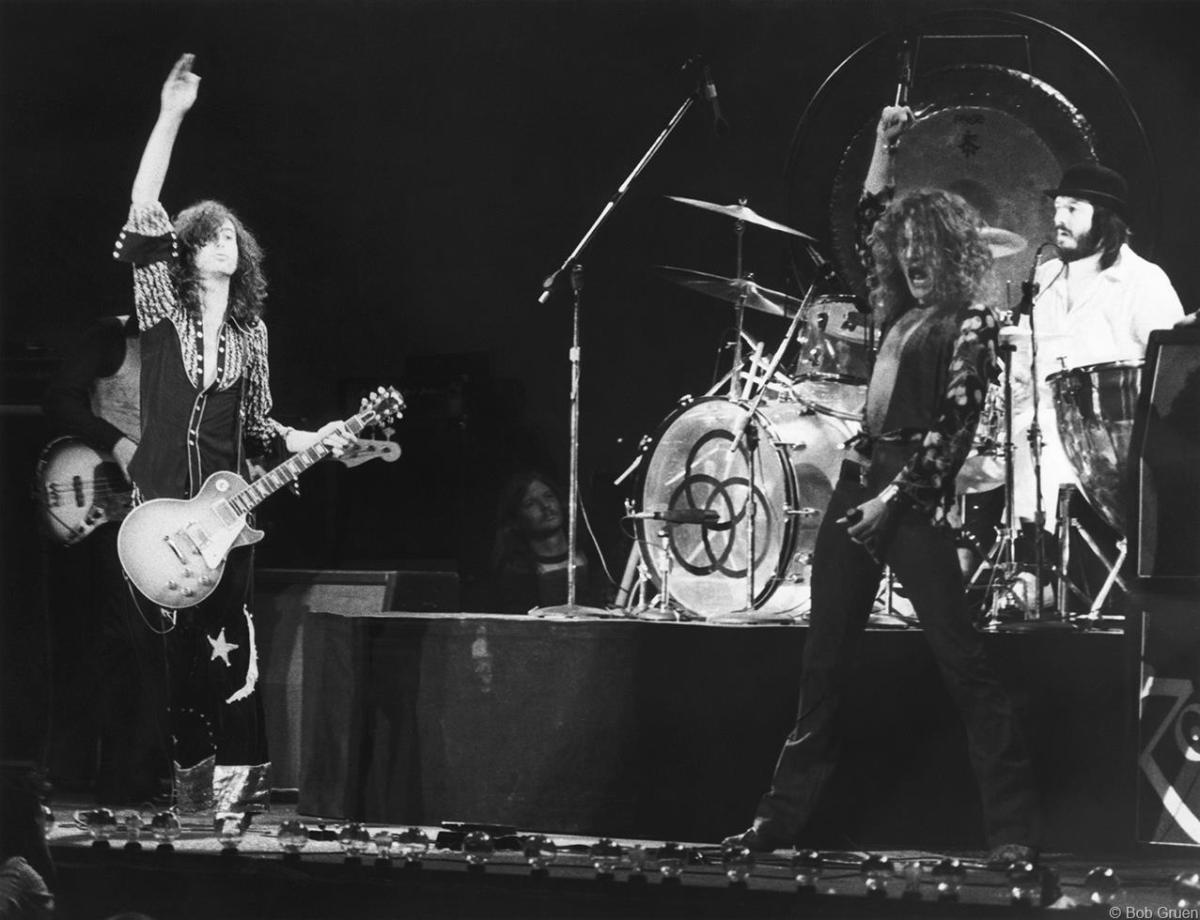 This is one of my favorite songs from Led Zeppelin. I think it’s one of their best if not their best. It was on the Physical Graffiti Album released in 1975. The song did not chart but is hugely popular on the radio.

The song is hypnotic to listen to. The drums are the key to this song… Jimmy Page has said this about John Bonham on Kashmir… It was what he didn’t do that made it work.

Kashmir, also known as Cashmere, is a lush mountain region North of Pakistan. India and Pakistan have disputed control of the area for years. The fabric Cashmere is made from the hair of goats from the region. The area is also famous for growing poppies, from which heroin is made.

The songwriters were John Bonham, Jimmy Page, and Robert Plant.

Robert Plant – Plant explained: “‘Kashmir’ came from a trip Jimmy and me made down the Moroccan Atlantic coast, from Agadir down to Sidi Ifni. We were just the same as the other hippies really.”

All band members agreed this was one of their best musical achievements. Robert Plant said it was “One of my favorites… it was so positive, lyrically.”

Plant wrote the lyrics in 1973 while driving through the Sahara Desert on the way to the National Festival of folklore in Morocco. Kashmir is in Southern Asia; he was nowhere near it. In Mojo magazine, September 2010,

The original title was “Driving To Kashmir.”

This runs 8:31. Radio stations had no problem playing it, especially after “Stairway To Heaven,” which was almost as long, did so well.

The signature guitar riff began as a tuning cycle Jimmy Page had been using for years.

This is one of the few Zeppelin songs to use outside musicians. Session players were brought in for the string and horn sections. Jimmy Page said (Rolling Stone, 2012): “I knew that this wasn’t just something guitar-based. All of the guitar parts would be on there. But the orchestra needed to sit there, reflecting those other parts, doing what the guitars were but with the colors of a symphony.”

Speaking with Dan Rather in 2018, Robert Plant said: “It was a great achievement to take such a monstrously dramatic musical piece and find a lyric that was ambiguous enough, and a delivery that was not over-pumped. It was almost the antithesis of the music, this lyric and this vocal delivery that was just about enough to get in there.”

Led Zeppelin played this in every live show from it’s debut in 1975 to their last concert in 1980.

Page and Plant recorded this with an orchestra and Moroccan musicians for their 1994 Unledded album.

Puff Daddy (he wasn’t Diddy yet) sampled this in 1998 for a song called “Come With Me.” He performed it on Saturday Night Live with Page on guitar.

The remaining members of Led Zeppelin performed this at the Atlantic Records 40th-anniversary party in 1988 with Jason Bonham on drums. It was a mess – the keyboards got lost in the feed and Plant was bumped by a fan and forgot some of the words. They had more success when they performed the song on December 10, 2007, at a benefit show to raise money for the Ahmet Ertegun education fund.

In the movie Fast Times At Ridgemont High, Mike Damone tells Mark Ratner, “When it comes down to making out, whenever possible, put on side one of Led Zeppelin 4. In the next scene, he is on the date with this song playing in the car. Cameron Crowe, who wrote the screenplay, couldn’t get the rights to any of the songs on Led Zeppelin 4, so he used “Kashmir” instead. Crowe used Zeppelin’s “That’s The Way” on his 2001 movie Almost Famous.

Plant said in an audio documentary that he loved this song not only because of its intensity but also because it was so intense without being considered “heavy metal,” a label none of the band liked.

Jimmy Page: “The intensity of ‘Kashmir’ was such that when we had it completed, we knew there was something really hypnotic to it, we couldn’t even describe such a quality. At the beginning, there was only Bonzo [drummer John Bonham] and me in Headley Grange. He played the rhythm on drums, and I found the riff as well as the overdubs which were thereafter duplicated by an orchestra, to bring more life to the track. It sounded so frightening at first…”

Zeppelin’s manager Peter Grant said: “I remember Bonzo having me listen to the demo of ‘Kashmir’ with only him and Jimmy. It was fantastic. What’s funny is that after a first recording of the song, we found it sounded a bit like a dirge. We were in Paris, we had Atlantic listen to it, and we all thought it really sounded like a dirge. So Richard (Cole) was sent to Southall in London to find a Pakistanese orchestra. Jonesy put it all together and the final result was exactly what was needed. He was an exceptional arranger.”

“Kashmir” makes the “songs performed at the Super Bowl” list because a few seconds of it played during Shakira’s set when she performed at halftime in the matchup between the Kansas City Chiefs and San Francisco 49ers in 2020.

Oh, let the sun beat down upon my face
And stars to fill my dream
I’m a traveler of both time and space
To be where I have been
To sit with elders of the gentle race
This world has seldom seen
They talk of days for which they sit and wait
All will be revealed

All I see turns to brown
As the sun burns the ground
And my eyes fill with sand
As I scan this wasted land
Trying to find, trying to find, where I’ve been

Oh, pilot of the storm who leaves no trace
Like thoughts inside a dream
Heed the path that led me to that place
Yellow desert stream
Like Shangri-la beneath the summer moon
I will return again
Sure as the dust that floats high in June
When moving through Kashmir

Oh, father of the four winds fill my sails
Across the sea of years
With no provision but an open face
Along the straits of fear