There were three Rosebuds made to burn at the end of the film. Orson Welles directed all the insert photography and Welles was happy with the second sled they burned, and so the third sled was not needed, and that was put in storage at RKO Pictures.

After that…The sled had been owned by John Hall, RKO’s chief archivist, who had bought it from a studio watchman. The watchman had found it in a trash heap outside the prop vault in the old RKO studios in Hollywood.

Steven Spielberg bought Rosebud during a Sotheby’s auction in 1982.  He paid $60,500 for the prop sled, beating out other bidders.

Spielberg has now donated the sled to the Academy Museum. The Museum is set to open on December 14, 2020, per their website.

Steven Spielberg: “It’s going to be at the Academy Museum eventually – the new Academy Museum. It’s in my office right now and it’s been there for years and years, ever since I purchased it. It was at home for a while and then it was in my office. But I think it really belongs in a museum so everybody can see it.” 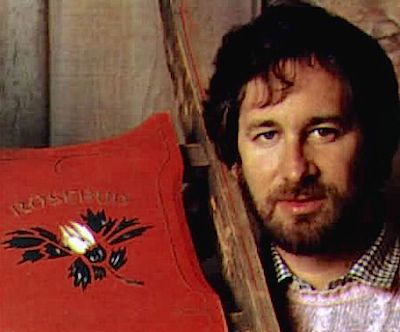 Steven talks about Rosebud starting around 7:12

16 thoughts on “Where is…Rosebud from Citizen Kane Now?”