Maybe I should clarify the original Lost In Space. Not the movie or the Netflix series…but the original sixties show.

Much to my surprise, this was not Robby the Robot from Forbidden Planet…Robby does appear in a couple of episodes of Lost In Space though. No, the Robot we are looking for was called the B9 Environmental Control Robot, also referred to as the Robot or just Robot, it was a Class M-3 General Utility Non-Theorizing Environmental Robot (G.U.N.T.E.R.) “designed and computerized as a mechanized electronic aid for Earth voyagers engaged in astral expeditions.

There were two robots used in Lost In Space. One for the main robot and the other as a stunt robot. the Robot was designed by Robert Kinoshita, who also designed Forbidden Planet‘s Robby the Robot. Robby appears in Lost in Space episode #20 “War of the Robots” and in episode #60 “Condemned of Space.”

Both the main robot and stunt robot fell into disrepair after the show went off the air. They were both found and restored to their sixties glory.

The main robot is privately owned by TV and film producer Kevin Burns. The “stunt robot” is in storage at the Science Fiction Museum and Hall of Fame (MoPoP) in Seattle, Washington. Like Robby the Robot, the B-9 Robot prop costume was re-used on at least one other show. On the Saturday morning children’s show Mystery Island, it was modified to create the primary character P.O.P.S. It had different domes, a different color scheme, and an added rectangular skirt of gold-colored tubes covering the rubber bellows legs and base.

I want to thank Lisa from Tao Talk for suggesting this topic for the “Where is?” feature this week. Thanks Lisa!

Robert Kinoshita and his creation…and Robby the Robot 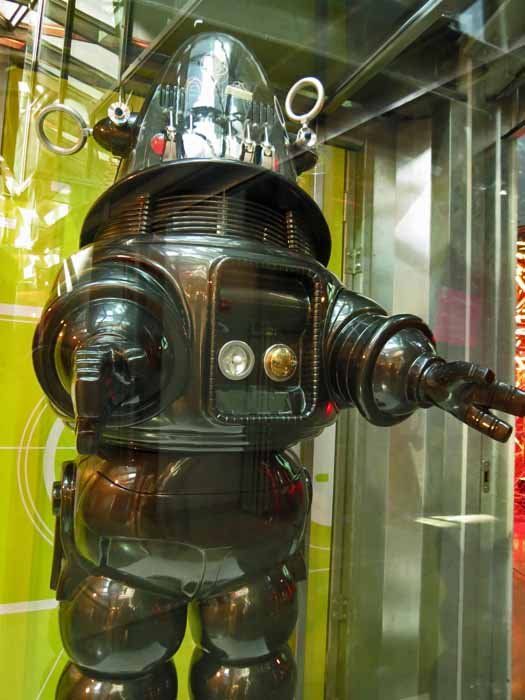 There is a small industry on replicas of this great robot.

17 thoughts on “Where is…The Robot from Lost In Space?”