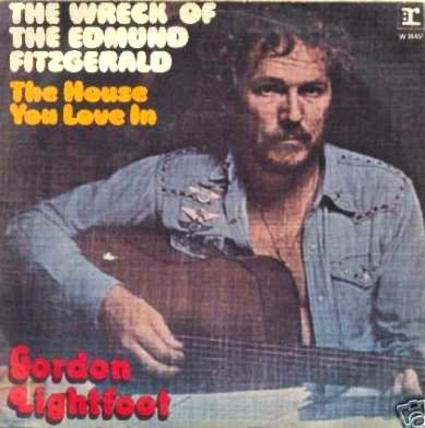 A song that was unfortunately a true story. It was written and performed by Gordon Lightfoot. The Edmund Fitzgerald was an American Great Lakes freighter that sank in a Lake Superior storm on November 10, 1975.

This is a factual retelling of a shipwreck on Lake Superior in November 1975 that claimed the lives of 29 crew members. On November 10, 1975, the S.S. Edmund Fitzgerald broke in half and sunk in Lake Superior. The storm she was caught in reported winds from 35 to 52 knots, and waves anywhere from 10 to 35 feet high.

She was loaded with 26,116 tons of taconite pellets at the Burlington Northern Railroad, Dock #1. Her destination was Zug Island on the Detroit River. There were 29 crew members who perished in the sinking.

Gordon Lightfoot: “The Edmund Fitzgerald really seemed to go unnoticed at that time, anything I’d seen in the newspapers or magazines were very short, brief articles, and I felt I would like to expand upon the story of the sinking of the ship itself,”  “And it was quite an undertaking to do that, I went and bought all of the old newspapers, got everything in chronological order, and went ahead and did it because I already had a melody in my mind and it was from an old Irish dirge that I heard when I was about three and a half years old.”

“I think it was one of the first pieces of music that registered to me as being a piece of music,” he continued. “That’s where the melody comes from, from an old Irish folk song.”

For those interested…I have a bio of the event at the bottom.

In the US, this was held out of the #1 spot by Rod Stewart’s “Tonight’s The Night.”

This was nominated for the Song of the Year Grammy, but it was beaten by Barry Manilow’s “I Write The Songs.” >>

Paul Gross hoped to use this tune for his episode of the TV show Due South, “Mountie on the Bounty.” He discreetly tried to secure the right to use the song, but out of respect for the families who wished not to be reminded of the tragedy, he didn’t pursue the option aggressively. He instead wrote the similarly themed song “32 down On The Robert MacKenzie.”

In 1970, baseball commissioner Bud Selig’s co-founding partner in the Brewers was fellow Milwaukee businessman Edmund B. Fitzgerald, a patron of Milwaukee arts and civic projects, and the son of a family that owned Great Lakes shipyards. In 1958, the freighter SS Edmund Fitzgerald was named for Edmund B.’s father. Fitzgerald later became a professor at Vanderbilt University.

An initial investigation suggested that the crew was partly to blame for the disaster by not securing the ship’s hatches. Lightfoot’s song reflected the original findings in the verse, “…at 7 p.m. a main hatchway gave in.” However, in 2010 a Canadian documentary claimed to have proven the crew of the ship was not responsible for the tragedy. It concluded that there is little evidence that failure to secure the ship’s hatches caused the sinking.

Lightfoot said he intended to change it to reflect the new findings. “I’m sincerely grateful to yap films and their program The Dive Detectives for putting together compelling evidence that the tragedy was not a result of crew error,” he said in a release. “This finally vindicates, and honors, not only all of the crew who lost their lives, but also the family members who survived them.”

Lightfoot wrote the lyrics after coming up with the melody and chords. He recalled: “When the story came on television, that the Edmund had foundered in Lake Superior three hours earlier, it was right on the CBC here in Canada, I came into the kitchen for a cup of coffee and saw the news and I said ‘That’s my story to go with the melody and the chords.'”

In a 2015 interview with NPR’s Scott Simon, Gordon Lightfoot explained that the article he read in Newsweek about the tragedy was, “Short shrift for such a monumental event.” Lightfoot says the song came about when he discovered the newspaper writers kept misspelling the name of the ship, rendering it as “Edmond Fitzgerald” rather than “Edmund Fitzgerald.” Though he didn’t say whether or not the misspelling was deliberate, he was quoted as telling Scott, “That’s it! If they’re gonna spell the name wrong, I’ve got to get to the bottom of this!”

Wreck Of The Edmund Fitzgerald

The legend lives on from the Chippewa on down
Of the big lake they called ‘gitche gumee’
The lake, it is said, never gives up her dead
When the skies of November turn gloomy
With a load of iron ore twenty-six thousand tons more
Than the Edmund Fitzgerald weighed empty
That good ship and crew was a bone to be chewed
When the gales of November came early

The ship was the pride of the American side
Coming back from some mill in Wisconsin
As the big freighters go, it was bigger than most
With a crew and good captain well seasoned
Concluding some terms with a couple of steel firms
When they left fully loaded for Cleveland
And later that night when the ship’s bell rang
Could it be the north wind they’d been feelin’?

The wind in the wires made a tattle-tale sound
And a wave broke over the railing
And every man knew, as the captain did too,
T’was the witch of November come stealin’
The dawn came late and the breakfast had to wait
When the gales of November came slashin’
When afternoon came it was freezin’ rain
In the face of a hurricane west wind

When suppertime came, the old cook came on deck sayin’
Fellas, it’s too rough to feed ya
At seven pm a main hatchway caved in, he said
Fellas, it’s been good t’know ya
The captain wired in he had water comin’ in
And the good ship and crew was in peril
And later that night when his lights went outta sight
Came the wreck of the Edmund Fitzgerald

Does any one know where the love of God goes
When the waves turn the minutes to hours?
The searches all say they’d have made Whitefish Bay
If they’d put fifteen more miles behind her
They might have split up or they might have capsized
They may have broke deep and took water
And all that remains is the faces and the names
Of the wives and the sons and the daughters

Lake Huron rolls, superior sings
In the rooms of her ice-water mansion
Old Michigan steams like a young man’s dreams
The islands and bays are for sportsmen
And farther below Lake Ontario
Takes in what Lake Erie can send her
And the iron boats go as the mariners all know
With the gales of November remembered

In a musty old hall in Detroit they prayed,
In the maritime sailors’ cathedral
The church bell chimed till it rang twenty-nine times
For each man on the Edmund Fitzgerald
The legend lives on from the Chippewa on down
Of the big lake they call ‘gitche gumee’
Superior, they said, never gives up her dead
When the gales of November come early

51 thoughts on “Gordon Lightfoot – The Wreck Of The Edmund Fitzgerald”