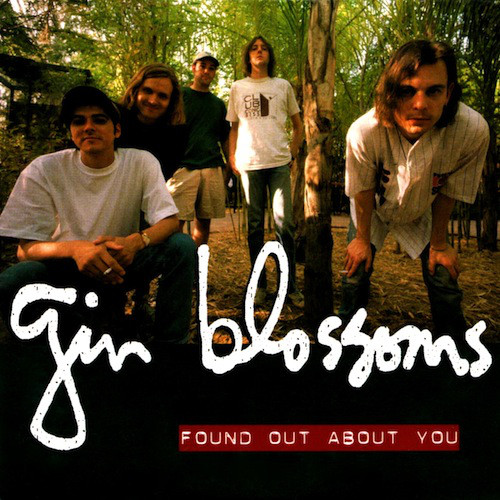 This was written by guitarist Doug Hopkins. He had problems with mental health and alcohol abuse and was fired from the band before this was released. He committed suicide on December 5, 1993. This song peaked at #25 in the Billboard 100 in 1994.

Gin Blossoms broke up in early 1997 but reunited in 2002. They still perform to this day but with some personnel changes.  The band had a total of 4 songs in the Billboard 100 with 1 top ten hit… Follow You Down/Til I Hear It From You.

The song is based on a compilation of episodes with several of Hopkins’ girlfriends:
“I heard about nights out in the school yard. I found out about you.” – This has a double meaning. He found out about a girlfriend meeting another guy in a schoolyard and it is also where he and another girl swung on the swings and talked finding out about each other.
“Street lights blink on through the car window. I get the time too often on A.M. radio.” – The group members hung around together and this particular line refers to a night when the girl from the swings was with Doug and Robin was driving. They were doing a lot of partying and were listening to the radio when the announcer said the time.

Found Out About You

All last summer in case you don’t recall
I was your and you were mine forget it all
Is there a line that I could write
Sad enough to make you cry
All the lines you wrote to me were lies
The months roll past the love that you struck dead
Did you love me? Only in my head.
Things you said and did to me
Seemed to come so easily
The love I thought I’d won you give for free

18 thoughts on “Gin Blossoms – Found Out About You —-Powerpop Friday”