On Fridays, I could just start with his first album and post song after song and they would fit perfect. I was walking through a drug store in the late seventies as a kid and I saw this album cover…I thought what??? another person named Elvis? Who is this skinny guy? 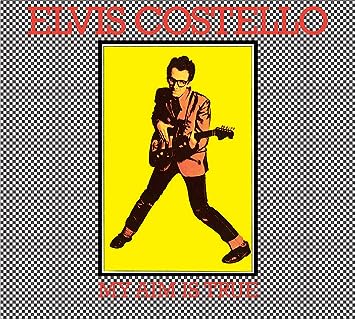 While at the drug store the guy was playing this album and I heard Alison… That was the first thing I ever heard by Elvis. The album peaked at #32 in the Billboard Album Charts in 1978. His songs were different than a lot of the radio hits of the day…with different, I mean better.

Elvis Costello on the song: We put these cheap synth strings on the track before there were really even synths. They said, ‘The strings will make it a hit!’ It was never a hit.”

Costello has never revealed who this song is about. In the liner notes to his Girls Girls Girls compilation album, he wrote, “Much could be undone by saying more.”

As is usually the case in Elvis Costello lyrics, the protagonist is sexually frustrated (see “Watching the Detectives”) and mad at the guy who always gets the girl. In this tale of unrequited love, “My aim is true” does not imply pure intentions; it means he wants to kill her.

The chorus is based on a song by The Detroit Spinners called “Ghetto Child.”

The line in this song, “My Aim Is True,” provided the title for the album.

My Aim Is True was Costello’s first album. He did not have a backing band at the time, so Nick Lowe, who produced the album, brought in a group called Clover. Huey Lewis was in the band, but didn’t participate in the sessions because they didn’t need a harmonica player. Alex Call was the lead singer of Clover, and he wasn’t needed on “Alison” either.

Call told us: “Elvis Costello was at that time Dec McManus, he was using his real name. He was just this mild-mannered, meek little songwriter who would hang out around Stiff Records, which was our management office. Elvis once said, ‘Man, I wish I could sing like you.’ They went and cut at this little place called Pathways – a little 8-track studio so small that all you had just enough space to play your instrument. They went in that first session, and in one session they cut ‘Alison’ and ‘Red Shoes’ and ‘Less Than Zero,’ these classic songs. I remember hearing them at this Rock ‘n’ Roll house we lived in outside of Headley, South of London called the Headley Grange House. John McFee (Clover bass player) brought back a reel-to-reel tape on one of those old Wollensak tape recorders. He played this stuff, and I mean, I was ready to quit after hearing that – it was so astounding. They did like three 8-12 hour sessions, and that was My Aim Is True. That is a classic record, just unbelievable. We were managed by the same guys and we hung out a lot with Nick. Nick produced a lot of our early sessions there. We made two albums with Mutt Lange, and nothing happened with the band. We came close in England to breaking a single, but it didn’t work and we ended up breaking up.” (Check out our interview with Alex Call.)

Linda Ronstadt recorded this on her 1978 Living in the USA album and released the song as a single. The single didn’t chart on the Hot 100 – a rare miss for Ronstadt, who was very popular at the time. The album, however, sold over two million copies, providing Costello with substantial royalties as the writer of one of its 10 tracks. He credits these earnings with keeping him afloat in the early years before he caught on.

There were two singles released in the US. The B-side of one has a mono version of “Alison,” the other has a live version of “Miracle Man” that was recorded on August 7, 1977 at the Nashville Rooms in London.

The B-side of the UK single is “Welcome to the Working Week.” A few copies were released with the A-side pressed on white vinyl while the B-side is the usual black.

This song was used in an episode of That 70’s Show when Hyde contemplates moving to New York to follow a girl who wants to start a punk rock band.

Linda Ronstadt was an early Elvis Costello admirer who was in the audience when he performed at Los Angeles’ Hollywood High in June 1978. When she recorded her version of “Alison,” she had one of her friends in mind: “A sweet girl but kind of a party girl type. I felt that she needed somebody to talk to her in a stern voice because she was getting married and she would have to change.”

One of Costello’s most enduring songs, he has performed it in concert for decades. “Some nights it comes to life in my head, and some nights it falls apart,” he told Rolling Stone in 2017.

The track’s producer, Nick Lowe, is one of Elvis Costello’s songwriting heroes. He told Uncut: “Since I was 17, I’ve wanted to write songs as good as Nick Lowe. ‘Alison’ was the result of a chemistry experiment involving Nick’s ‘Don’t Lose Your Grip on Love’ and a song by The Detroit Spinners.”

Some people think “Alison” is a murder ballad. “It isn’t,” Costello told Rolling Stone in 2002. “It’s about disappointing somebody. It’s a thin line between love and hate, as the (New York City R&B group) Persuaders sang.”

Oh, it’s so funny to be seeing you after so long, girl
And with the way you look, I understand that you were not impressed
But I heard you let that little friend of mine
Take off your party dress

Allison, I know this world is killing you
Oh, Allison, my aim is true

Well, I see you’ve got a husband now
Did he leave your pretty fingers lying in the wedding cake?
You used to hold him right in your hand
But it took all that he could take