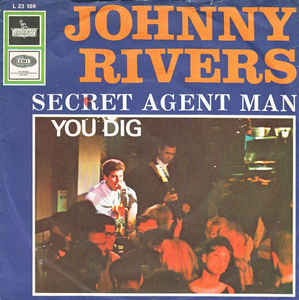 The opening guitar riff is worth the price of admission for the song. It’s one of those riffs you are required to learn by law if you want to be a guitar player. It was written by P. F. Sloan and Steve Barri. I always liked the song but it really made an impression on me when a band named the White Animals played this song when they opened up for the Kinks in the early 80s.

The opening lick was written for a CBS TV Show called Danger Man. After the short theme caught on, they wrote a complete song around it. Sloan said ” When the title of the show was changed to Secret Agent, he says it was a breakthrough. “That changed everything,” “The lyric just came together in no time at all. It just worked immediately.”

This was the theme for a TV series called Secret Agent, starring Patrick McGoohan. Unlike many TV themes, the song held up on its own with a distinctive dueling guitar sound.

This is an example of “Spy” music. The sound implied action and was associated with James Bond movies.

P.F. Sloan and Steve Barri, who at the time was just starting the band The Grass Roots, wrote this song. Secret Agent was a US adaptation of a hit show in England called Dangerman, and CBS needed a 15-second theme to replace the British version. Sloan wrote of the song (from his website): “Somebody thought I should do a full length instrumental of the song. So I did. Meanwhile, the song was picked by CBS and Johnny Rivers recorded the quick 15-second song for the TV show. The Ventures, the genius guitar instrumental group, heard the demo and recorded and released the song way before Rivers even had a finished song. The publishers asked me to finish the song, Rivers recorded it, not one of his favorite songs back then, but he’s happier with it now.”

Some of the artists to record this song include Hank Williams Jr., Devo and Blues Traveler.

This was used in commercials for Wal-Mart and also for Chase credit cards. Some of the many movies to use the song include Repo Man, Bowfinger, Can’t Buy Me Love, Austin Powers: International Man of Mystery, and Ace Ventura: When Nature Calls.

According to P.F. Sloan, Johnny Rivers didn’t like this song and was content to record just the quick TV version until The Ventures charted with it. Both acts recorded for subsidiaries of Liberty Records, and the label was able to convince Rivers to record it.

Sloan told us in 2014 that Rivers had clearly embraced the song. “I saw him about two months ago and I’ve got to say he did an absolutely killer version,” he said. “Johnny must have sang that song half a million times, and he still sings it with so much gusto, and the audience goes nuts. That’s something great to see.”

Beware of pretty faces that you find
A pretty face can hide an evil mind
Ah, be careful what you say
Or you’ll give yourself away
Odds are you won’t live to see tomorrow

Swingin’ on the Riviera one day
And then layin’ in the Bombay alley next day
Oh, don’t you let you let the wrong word slip
While kissing persuasive lips
Odds are you won’t live to see tomorrow