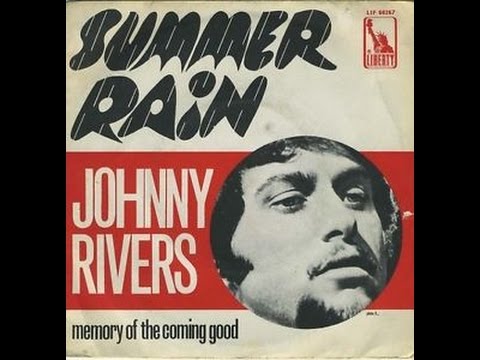 All summer long we were dancing in the sand, Everybody just kept on playing “Sgt. Pepper’s Lonely Hearts Club Band”

Ok, I’m cheating a little on this kinda… It doesn’t mention “Beatles” but Sgt Pepper’s Lonely Hearts Club Band was the Beatles alter ego on the Sgt Peppers album.

This song was a hit for Johnny Rivers and it was written by James Hendricks. Summer Rain was on his Realization album released in 1968. It was written about the Summer of Love in 1967. The song peaked at #14 in the Billboard 100, #10 in Canada in 1968.

I like Johnny Rivers…he was strictly a singles artist and had some good songs. He did chart a lot of covers in his career. He had 29 songs in the top 100, 9 top ten songs and 1 number 1 (Poor Side of Town).

I first heard this song in the 80s on a local oldies station at the time… 96.3 in Nashville.