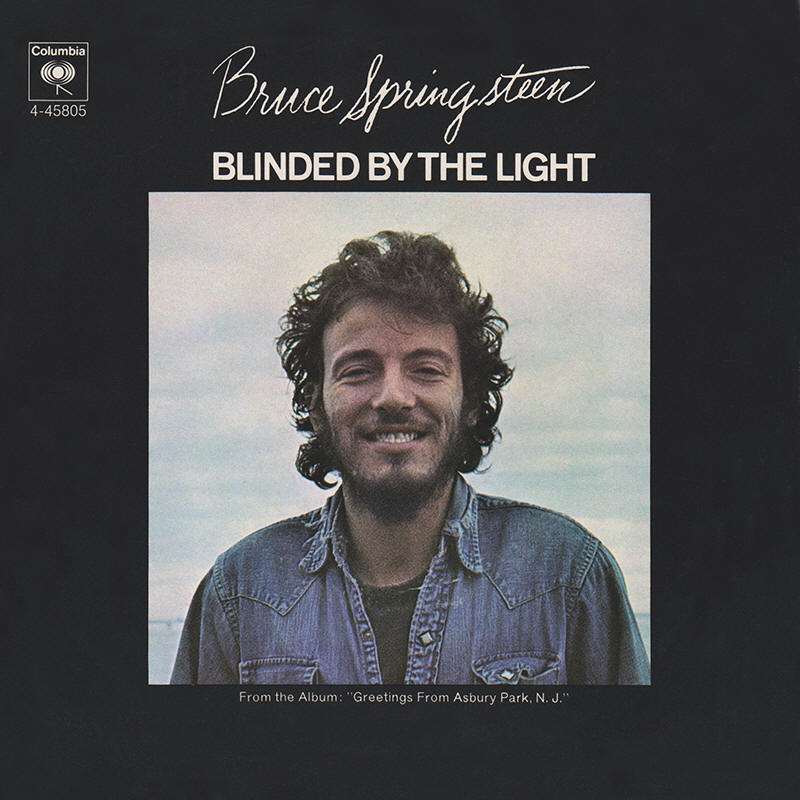 I know that the Manfred Mann version is more popular but I always listen to Bruce’s version of the song he wrote. It’s not as slick whatsoever…maybe that is the reason I like it so much. It’s raw and Bruce just pelts you with words over and over.

This song was the first cut of his album “Greetings From Ashbury Park” which is a very underrated album. The album peaked at #60 in the Billboard Album Charts.

This was Springsteen’s first single. It was released only in the US, where it flopped. It was, however, a #1 hit for Manfred Mann’s Earth Band in February 1977, becoming the only #1 Hot 100 hit Springsteen ever wrote. The Manfred Mann version was much more elaborately produced, and Springsteen hated it at first. It ended up earning him a very nice payout.

Springsteen talked about this song in detail on an episode of VH1 Storytellers.A lot of the references are personal, to include people he knew or had met on the Boardwalks, or had grown up around, or were just direct personal references to himself:

“Indians in the summer” – Bruce’s little league baseball team as a kid.

“Boulder on my shoulder” – a “chip” on his shoulder.

“Some all hot, half-shot, heading for a hot spot, snapping fingers clapping his hands” – Being a “know it all kid growing up, who doesn’t really know anything.”

“Silicone Sister” – Bruce mentions that this is arguably the first mention of breast implants in popular music – a dancer at one of the local strip joints in Asbury Park.

Manfred Mann’s version replaces the line “Cut loose like a deuce” with “Revved up like a deuce.” In their version, “Deuce” was commonly misheard as “Douche.” Springsteen’s original line makes a lot more sense – a deuce is a 1932 Ford hotrod. On his Storytellers special, Springsteen said (in a jesting manner): “I have a feeling that is why the song skyrocketed to #1.”

Talking about the barrage of images he used in his early songs, Springsteen told ZigZag: “I see these situations happening when I sing them and I know the characters well. I use them in different songs and see them in shadows – they’re probably based on people I know or else they’re flashes, that just appear there. There’s a lot of activity, a whole mess of people… it’s like if you’re walking down the street, my songs are what you see, only distorted. A lot of songs were written without any music at all, it’s just that I do like to sing the words.”

After eight years playing in bars where audiences usually didn’t listen to or couldn’t hear the words, Springsteen used his first album to unload a ton of lyrics. All these lyrics helped earn Springsteen the tag “The New Dylan.” Singer-songwriters like James Taylor and Kris Kristofferson also shared the comparison, and Bruce went out of his way to shed the tag by making his next album a true rock record.

This was the first song on Springsteen’s first album. Greetings From Asbury Park, N.J. featured a postcard on the cover that fans would look for any time they were near the town.

Along with “Spirit In The Night,” this was one of two songs on the album featuring Clarence Clemons on saxophone. The E Street Band became a much bigger part of Springsteen’s songs on his next album.

Springsteen wrote the lyrics first and filled in the music later. The only time he wrote this way was on his first album.

The working title was “Madman’s Bummers,” taken from words in the first line.

This was one of the songs that prompted Columbia Records to market the album by claiming “This man puts more thoughts, more ideas and images into one song than most people put into an album.”

Springsteen wrote this after Columbia Records rejected his first attempt at an album, telling him to make some songs that could be played on the radio. He came up with this song and “Spirit In The Night.”

Madman drummers bummers and Indians in the summer with a teenage diplomat
In the dumps with the mumps as the adolescent pumps his way into his hat
With a boulder on my shoulder, feelin’ kinda older, I tripped the merry-go-round
With this very unpleasing sneezing and wheezing, the calliope crashed to the ground
Some all-hot half-shot was headin’ for the hot spot, snappin’ his fingers, clappin’ his hands
And some fleshpot mascot was tied into a lover’s knot with a whatnot in her hand
And now young Scott with a slingshot finally found a tender spot and throws his lover in the sand
And some bloodshot forget-me-not whispers, daddy’s within earshot, save the buckshot, turn up the band

Some brimstone baritone anti-cyclone rolling stone preacher from the East
He says, dethrone the dictaphone, hit it in its funny bone, that’s where they expect it least
And some new-mown chaperone was standin’ in the corner all alone, watchin’ the young girls dance
And some fresh-sown moonstone was messin’ with his frozen zone to remind him of the feeling of romance

Some silicone sister with her manager’s mister told me I got what it takes
She said, I’ll turn you on, sonny, to something strong if you play that song with the funky break
And Go-Cart Mozart was checkin’ out the weather chart to see if it was safe to go outside
And little Early-Pearly came by in her curly-wurly and asked me if I needed a ride
Oh, some hazard from Harvard was skunked on beer, playin’ backyard bombardier
Yes, and Scotland Yard was trying hard, they sent some dude with a calling card, he said, do what you like, but don’t do it here
Well, I jumped up, turned around, spit in the air, fell on the ground and asked him which was the way back home
He said, take a right at the light, keep goin’ straight until night, and then, boy, you’re on your own
And now in Zanzibar, a shootin’ star was ridin’ in a side car, hummin’ a lunar tune
Yes, and the avatar said, blow the bar but first remove the cookie jar, we’re gonna teach those boys to laugh too soon
And some kidnapped handicap was complainin’ that he caught the clap from some mousetrap he bought last night
Well, I unsnapped his skull cap and between his ears I saw a gap but figured he’d be all right

22 thoughts on “Bruce Springsteen – Blinded By The Light”